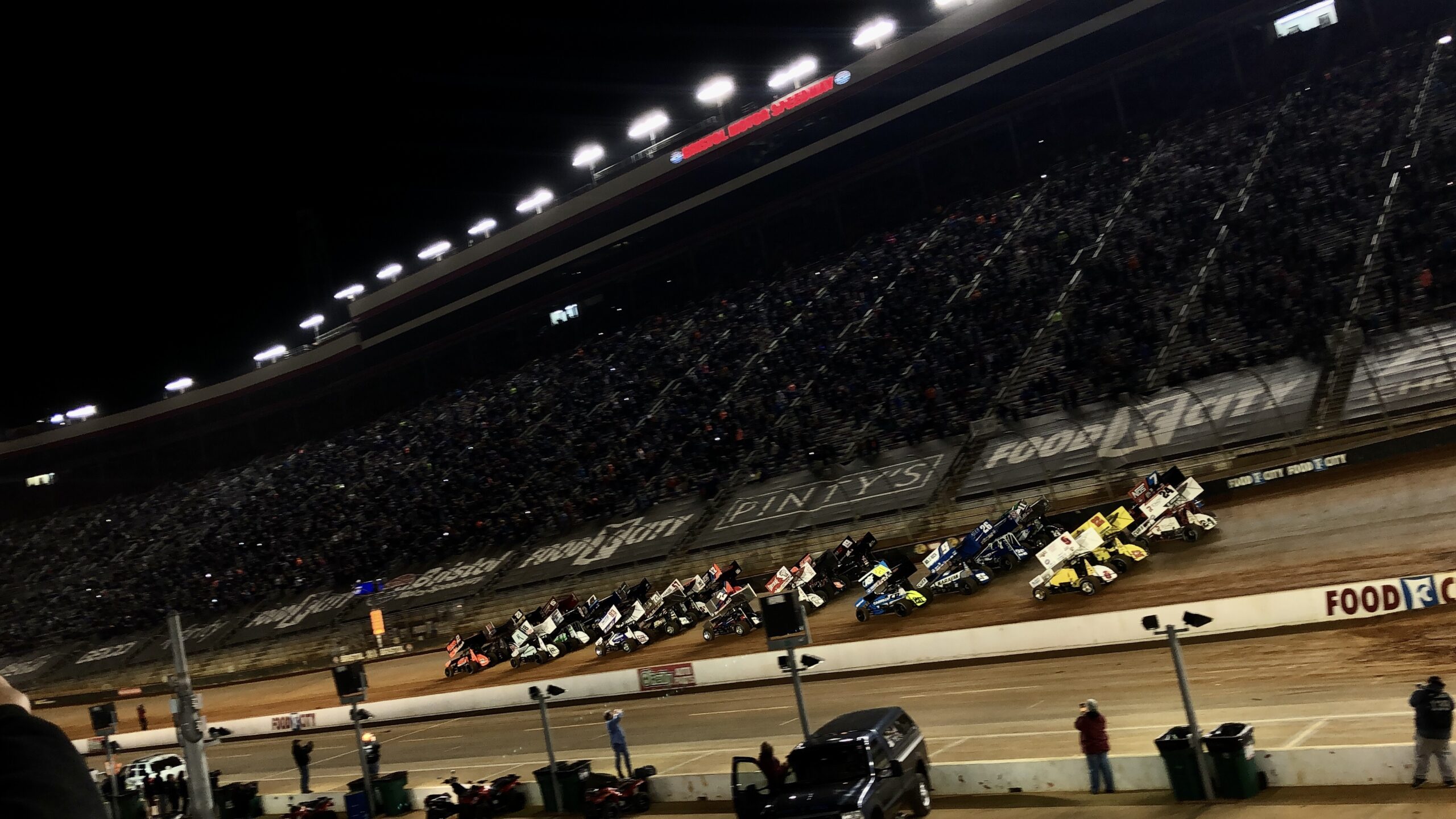 The World of Outlaws NOS Energy Sprint Car Series started its second half of the season last night at Wilmot Raceway in Wilmot, Wisc. Forty races now remain in the series’ 81-race schedule. Photo by me during the World of Outlaws stop at the dirt-covered Bristol Motor Speedway in April.

I’m trying something new here: a roundup of select auto races around the country. Inside you can find a rundown of notable finishes and results from yesterday as well as a preview for the day.

Today’s racing slate was largely shortened because of rain, but there’s still plenty to follow.

Your race guide for this weekend.

Kyle Busch said after the race he meant to push Daniel Hemric. It didn’t go as planned for his teammate. #NASCAR #XfinitySeries pic.twitter.com/fFzMFy7v76

“I’m sorry to Daniel.”@KyleBusch gets his 102nd win in the @NASCAR_Xfinity Series in his final start, but the celebration is more somber after getting into his teammate Daniel Hemric. pic.twitter.com/3VCbKAYHAg

In his final start in the series, Kyle Busch won his career-leading 102nd Xfinity Series career race. He used a push gone awry on teammate Daniel Hemric to do it, though, making it a rather fitting sendoff for Busch, known for  stirring emotions, in the Xfinity Series.

Brad Sweet rolled to his third straight win and 13th of the year on Saturday at Wilmot Raceway in Wilmot, Wisc. The two-time reigning series champion now has a 132-point lead over David Gravel with 40 races to go.

Tony Stewart finished third to extend his lead in the series standings over Ernie Francis Jr. with one race to go at Nashville Fairgrounds next Saturday, July 17.

Changed motors early in the night … became an uncle just an hour ago.

Ends in his sixth overall sprint car win of the year. pic.twitter.com/hLxFlXY6vl

From last night: @AnthonyMacri7 caps off an eventful evening in victory lane at @PortRoyalSpdway?https://t.co/wdXnmnegDy

After dominating the first stop at Atlanta Motor Speedway earlier this year only to lose the win late to Ryan Blaney, Kyle Larson returns to the abrasive 1.5-mile track with gaudy odds to build on such superiority.

SuperBook USA pegs Larson at +175 to add to his already season-leading win total (five Cup Series wins). Not only does Larson lead the Cup Series in wins, but he’s won 10 of his last 21 overall races in NASCAR, Sprint Cars, and Dirt Late Models.

It’s been some time since motorsports has seen something like @KyleLarsonRacin.#NASCAR, dirt, pavement, open-wheel, closed-wheel, road courses. Larson wins on it all.

Inside the rise of North America’s busiest, most fluid racer, feat. @MarioAndretti https://t.co/tqQGgT2QK3

Larson’s surge has dwindled Denny Hamlin’s regular season lead to just three points with six races before the playoffs. Hamlin, still searching for his first on the year, started on the pole at Atlanta in the spring, leading 27 laps before settling for fourth.

Chase Elliott, meanwhile, will lead the field to green on Sunday, fresh off his second win of the year at Road America. Martin Truex Jr., currently seventh in the regular season standings and projected as the No. 2 seed for the playoffs behind Larson, will start from the rear Sunday at Atlanta after failing pre-race inspection twice.

PPD, All Star Circuit of Champions at Sharon (Ohio), FloRacing

The All Stars will now head for a two-week break thanks to it being Kings Royal week. Things will pick back up at Lake Ozark on June 23 with Tyler Courtney (series-leading five wins) clinching to a 248-point lead over Cory Eliason and 256 over Hunter Schuerenberg.

⛈ Mother Nature is at it again…

Sunday’s events at @TSS_Haubstadt have been canceled due to rain.

With Sunday’s cancellation, the Summer Nationals head to Lake Cumberland in Burnside, Ky.

Bobby Pierce, the Summer Nationals leader by 102 points over Tanner English, looks to get back on track after mechanical issues Friday at Farmer City.

Due to heavy overnight rain, tonight’s USAC @NosEnergyDrink Midget National Championship event at @ssmctrack has been rained out.

Track & series officials are working on a reschedule date.

The series resumes this Tuesday, July 13, at @RedDirtRaceway in Meeker, Okla. pic.twitter.com/Azk0qoUPHO

A rough weekend for the USAC faithful. After the Cornbelt Clash rained out Saturday night at Knoxville Raceway, the midget show on Sunday in Sweet Springs gets postponed for precipitation, too.

Buddy Kofoid holds a 48-point lead over Chris Windom and an 89-point cushion over Emerson Axsom in the series standings with 30 races remaining. Justin Grand and Tanner Thorson are 121 and 127 points, respectively, off Kofoid’s mark.

The race for the Buffalo Wild Wings Northern Outlaw Sprint Association title rolls into the high banks of Huset’s, S.D.

Brendan Mullen earned his third victory of the year last night at Devils Lake Speedway to pull within 20 points of Wade Nygaard (793 points) for the NOSA series lead. Jade Hastings, meanwhile, is just three points behind Nygaard  for the top spot with 19 races to go.

Zach Omdahl and Nick Omdahl are fourth and fifth in the series points, respectively.