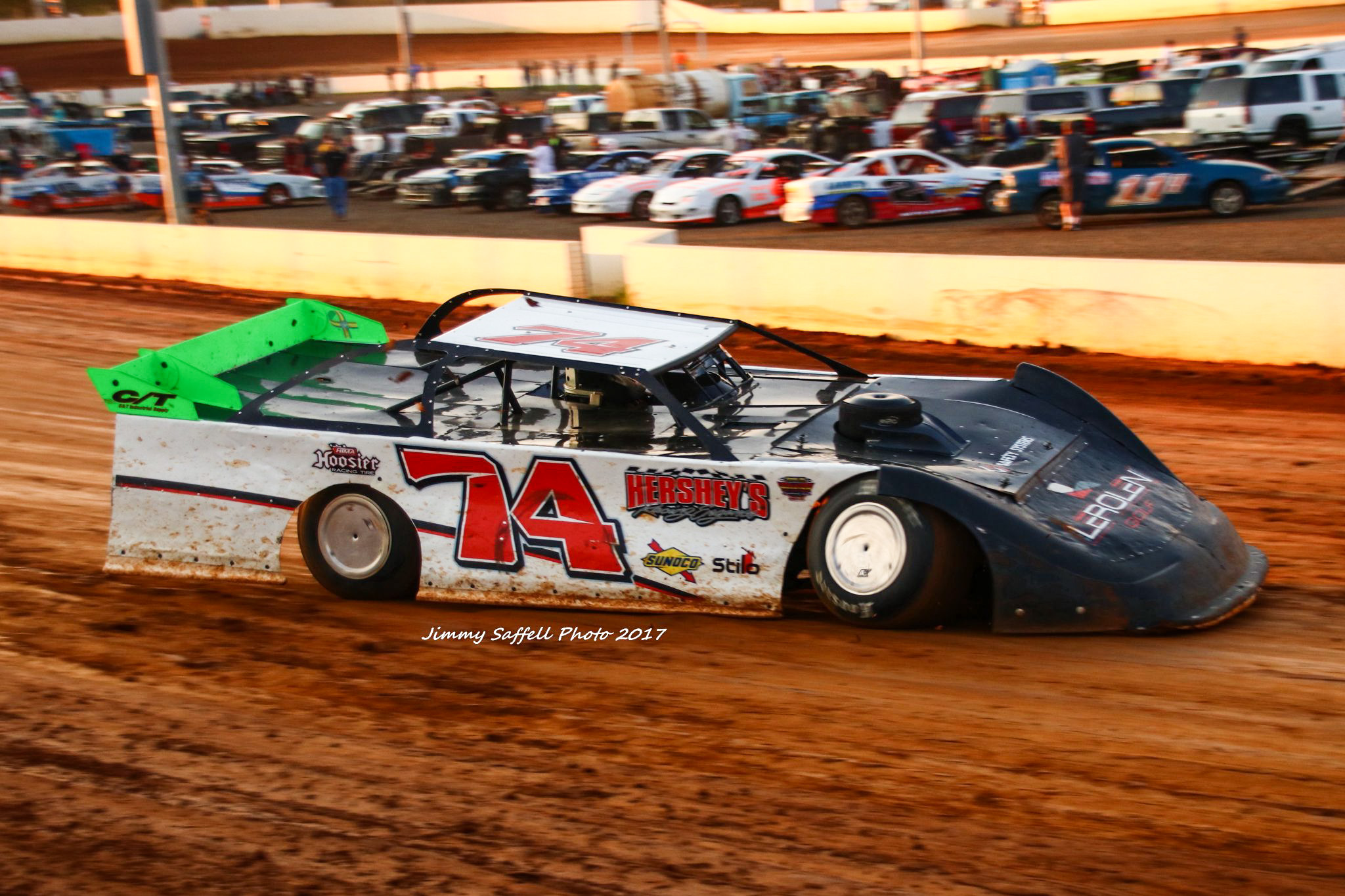 WINCHESTER, Va. — Roughly five years ago, Tyler Hershey was one of the more consistent limited late model racers in the Maryland-Pennsylvania-Virginia panhandle, finding victory lane here and there. Then, as the Mercersburg, Pa. native grew older, reality struck. Hershey put racing on the backburner to pursue a college degree in engineering, and, in the process, he got married.

“Real life got in the way of racing a little bit,” Hershey said.

Hershey, now 26, has settled into adulthood and found his way back on the racing circuit regularly, now competing in local super late model events — a step above his former limited late model ride. On Saturday night, Hershey scored his first ever super late model feature win in flag-to-flag fashion, leading all 35 laps in his No. 74 Lerolen Golf / Hershey Racing Engines late model in the annual Winchester-Hagerstown Shootout at Winchester (Va.) Speedway.

“I guess you can say we’re back now,” Hershey said. “We have a couple limited late model wins, but this is the first super [late model] win. It’s pretty special, for sure.”

Prior to Saturday, Hershey only tallied one top-five in 10 races across four different tracks this season.

Dale Hollidge, the reigning super late model track champion at Winchester Speedway, won the pole via redraw, but had to switch to his backup late model and start from the rear after an engine failure. Hershey, who was supposed to start in third, benefited from this sequence and started on the pole.

The first 11 laps were caution free, and Hershey built up a three-to-four car length lead over second-place Trever Feathers. Then, over the next four laps, three cautions and a red flag for a 10-car pileup occurred. Even through four restarts with Feathers lining up next to him each time, the fastest guy in practice and in time trials, Hershey safeguarded the lead.

It wasn’t a cruise-control type of triumph, however. Amid lap-traffic, Feathers lurked two car lengths behind Hershey for the final 21 laps, and going into Turn 3 on the final circuit, Feathers entered the last turn valiantly in attempt at the go-ahead pass. Feathers slid into Hershey, who ran the middle groove, and subsequently spun.

“We definitely made some contact, but we’re all racing for the same spot,” Hershey said. “It happens. I’m just glad we came out on top.”

For Hershey, the first super late model win is sweet, but there was one thing missing.

“Kinda sucks my wife and daughter weren’t here tonight,” he said. “It’s the first one they’ve missed in a long time. It’s kind of unfortunate, but that’s just how it is sometimes.”

Hershey knows reality too well. He also knows he can’t have what some of his competitors utilize and deploy — like NASCAR-esque haulers and swanky, top-of-the-line racing equipment. Instead, he embraces his family-owned unit and his engine made by his uncle.

“Just adds a little bit to it … most of it’s a family deal; so, we’re proud of that,” Hershey said. “We operate on a pretty small budget, so to come in here and beat some these guys, it makes it that much more special.”

His smile grew larger and he then turned to where his No. 74 Hershey Racing Engines super late model parked, just behind his small-scale trailer.