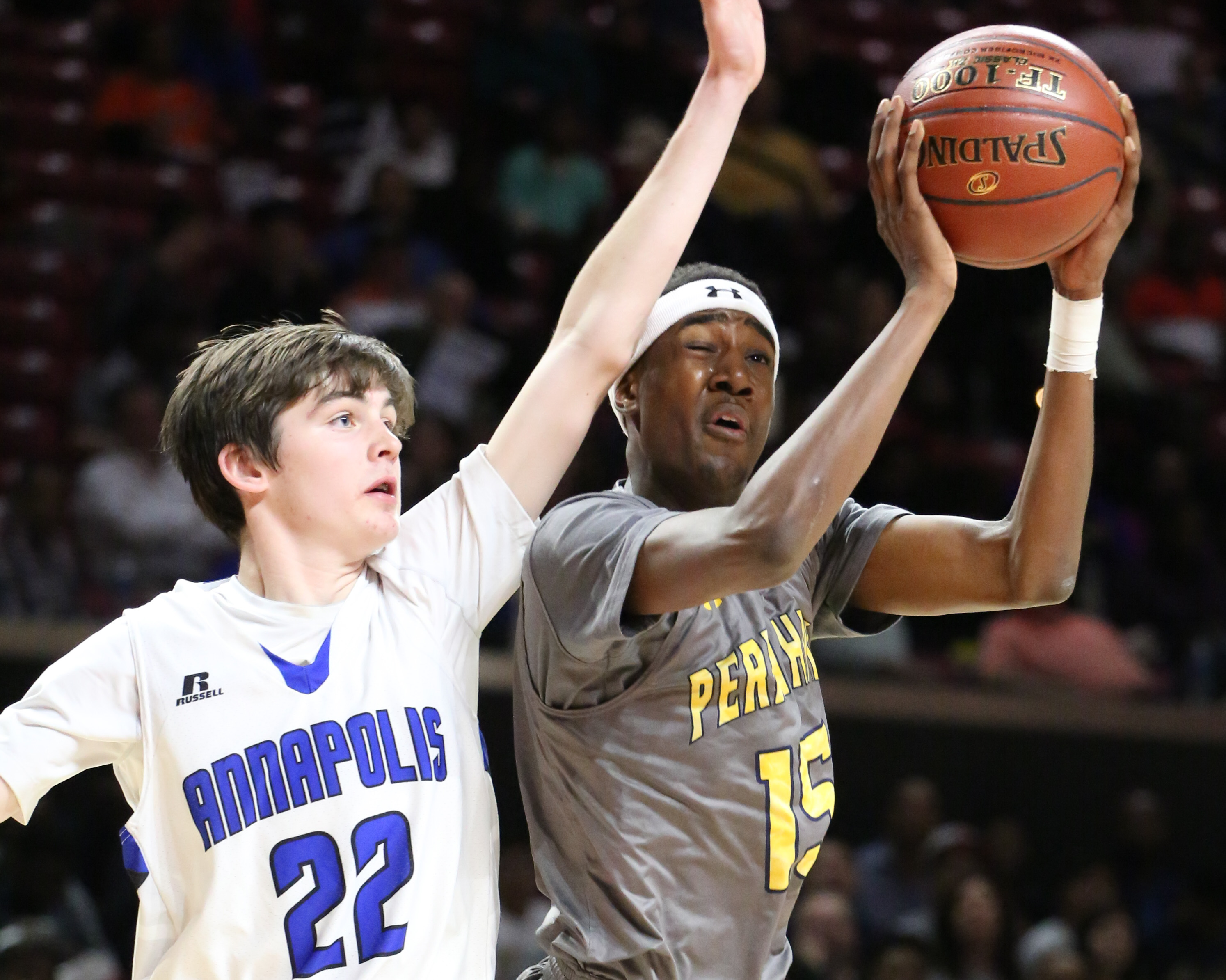 BALTIMORE – Tyler Holley barreled into the lane that was congested with sky-blue jerseys, doing his all to combat Eleanor Roosevelt’s interior-packed 2-3 zone. Anthony Walker’s floater rang off the back iron with a good 25 seconds remaining in overtime, and the Raiders were thinking go-ahead bucket on the ensuing possession, trailing by one. But there was Holley, who had already willed Perry Hall from behind, in position for another defining bucket; this time a three-point play off an emphatic put-back.

Not long prior, Perry Hall sputtered through offensive ineptitude and trailed by 15. In that moment, Holley put them ahead by four — and for good.

Holley scored 11 of his 17 points in the final five minutes of Monday’s clash with No. 14 Eleanor Roosevelt at home to help lift No. 18 Perry Hall out of a 15-point second-half deficit and instead to a monumental win, 71-66.

It’s the 30th straight win at home for the Gators, who move to a 9-4 with a three-game win-streak. The contest featured the previous two MPSSAA Class 4A state champions, with the Gators winning it all last year and the Raiders in 2015-16.

“This is enormous,” Perry Hall coach George Panageotou said. “This is enormous because of how many good teams we’ve played. We didn’t win all the games against those good teams, but to have a matchup like this and to win like using the whole game, it’s enormous.”

Perry Hall started the season 6-4, and didn’t have its first home game until the opening week of January. It also took losses to ranked Poly, John Carroll and McDonogh, and also got upset by Gerstell Academy.

Eleanor Roosevelt scored the first 11 points of the game to stake an 11-0 lead in the opening four minutes, before Ole Miss-bound forward Anthony Higgs (game-high 19 points) got Perry Hall on the board with a put-back flush at the 3:25 mark.

Perry Hall managed not let things snowball, and only trailed 17-9 at the end of the first quarter thanks to La’Quill Hardnett’s put-back and DJ Cloude’s transition layup off a Raider turnover.

The Raiders then started the second quarter like the first, with a 7-0 run that upped their lead to 24-11. Cameron Brown put Eleanor Roosevelt in the bonus with six minutes left in the half and sank both free throws during the run.

To that point, Perry Hall was 5-for-16 from the floor and turned it over 11 times. Higgs responded with a 3-pointer at the top of the key to start a 7-0 run that brought the Gators to 24-18 with 3:15 until the break. But Eleanor Roosevelt’s Juston Bailey uncorked an 8-0 personal run with back-to-back 3s from the far corner and a layup off the glass in transition, which pushed Eleanor Roosevelt’s lead to 32-18.

After trailing 35-25 at the half, Eleanor Roosevelt’s Isaiah Gross (18 points) drilled an uncontested 3 on the right wing to keep the Raiders rolling, 42-27, in what appeared to be a rout in the making, as Perry Hall stammered in the half-court and had no answer to the Raiders’ traps.

“I thought we were fortunate to only be down 10 at the half. We got busted,” Panageotou said. “We had to use our height advantage.”

Then the Gators forced four straight stops and ignited a 9-0 run that eventually became 15-2. Hardnett (12 points) hit a 3 to make it 42-34 and Walker kissed a reverse layup off the glass to make it 42-36. Walker (12 points) hammered down a slam moments later and Cloude finished the quarter with a fast-break layup to bring the Gators within 45-42 heading to the fourth quarter.

“We knew they were a tough team, we just wanted to feel our game,” Holley said. “Second half, we figured them out. We started getting buckets and we started playing our game. And the whole motto was we weren’t giving up. We’re going to keep fighting back.”

When the Raiders pushed their advantage to six, Cloude, Higgs and Holley all produced buckets during a 6-0 burst that tied it at 48-48.

In the waning seconds, out of a timeout, Holley found space in the Raiders’ zone, and powered to the rim for the game-tying layup with 0.8 seconds to go. Then in overtime he produced seven of his team’s 15 points in which Perry Hall took its first lead of the night, with 2:20 remaining. And from there, they never relinquished.

“I mean, we didn’t take our first lead of the game until overtime. The perseverance, the kids, the no quit, the hustle,” Panageotou said. “That’s what we need to win another one.”