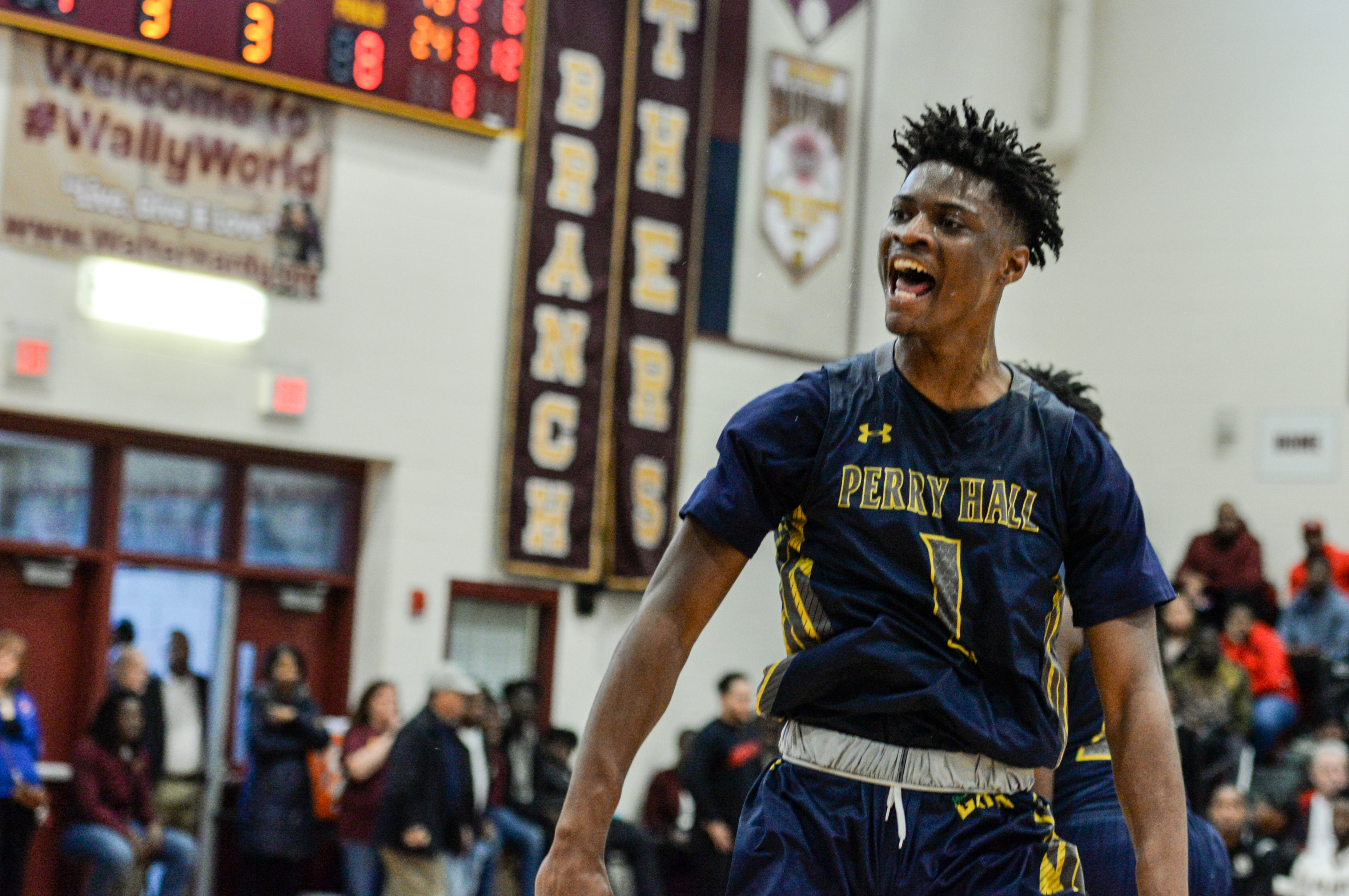 The third installment in a series of the 16 region-winning Maryland Public Secondary Schools Athletic Association boys’ basketball teams ahead of this week’s state tournament at the Xfinity Center.

With a wide, merciless grin, La’Quill Hardnett skipped around the out-of-bounds marker in Paint Branch High School’s gym, flashing three fingers to the crowd that largely consisted of Panthers fans as he yelled “One! Two! Three! We’re getting close to three in a row, baby!”

This didn’t come in the final seconds of Perry Hall’s 4A North title game at Paint Branch but at the end of the third quarter, after a decisive 11-0 run put the Gators up 10. Many opposing fans were visibly irritated, shooing the 6-foot-9 forward with hand flicks since their team hung around. But those who don’t know Hardnett’s personality will be misperceived, and almost certainly spiteful. He plays with a buoyancy that’s often mistaken for arrogance when in actuality, he openly wears his beliefs.

In a world that’s quick to judge, compelled to bash and told to be mindful of feelings, Hardnett remains his jaunty self, his personality as the special ingredient on Perry Hall’s adverse road back to the Class 4A Final Four for the third time in a row.

“All offseason, we put in the work and not laugh,” Hardnett said after the 88-75 win over Paint Branch on Saturday, Perry Hall’s third straight 4A North title. “When it’s time to play, we know what we have to do to win. So, I’m gonna have fun while doing it.”

Perry Hall, the reigning 4A state champions chasing back-to-back rings, will now play Montgomery County’s Gaithersburg in the semifinals on Thursday night at 7 p.m. at University of Maryland’s Xfinity Center. Getting here wasn’t a cakewalk, however, as the Gators started the year 2-4, finished at 16-6 (5-6 on the road) – losing some head-scratchers along the way – and failed to even qualify for the Baltimore County championship and a top seed in the region.

“We’re just letting everybody know it’s nothing different,” said Hardnett, who’s averaging 16 points, 10 rebounds and four assists per game. “We’re still coming how we’re coming. We’re not overrated, or none of that. It’s real. We will see y’all at Maryland.”

In those times of uncertainty, when the Gators dropped games and slid in local media polls — creating the analogy that the competition in 4A had leveled off — Hardnett’s playfulness released tension and reminded them operation is most efficient when playing freely.

“We feed off his lead,” senior guard DJ Cloud said. “When [people] trash talk, I don’t let that get to me. My man [Hardnett] here, he’s contagious. I just start smiling and laughing. Me, I’m going to start laughing, too.”

“Contagious,” junior 6-8 forward Anthony Walker said. “That’s what it is. … [Our] attitudes got better. When we’re down, we used our tempo to get it together. [Hardnett is] smiling out there. DJ is smiling. Everybody is smiling. We gonna win together. We gonna lose together.”

And to Perry Hall’s defense, it beefed up its schedule this year with stiffer competition, hoping it’d prepare them for this stretch of the season. In 2015-16, a season that ended in the Final Four to eventual state champion Eleanor Roosevelt, it took four losses. Last year, the Gators lost just twice. This year, that number is six, but setbacks came against No. 1 Poly, MIAA power’s John Carroll and McDonogh, private school Gerstell Academy, 3A North champion Milford Mill and Woodlawn.

“We made that schedule for a reason and felt like we were battle-tested,” Perry Hall coach George Panageotou said. “We played some really good teams this year. We won some really close games. … That’s what we did. We’re peaking at the right time and, way back in August when we were making our schedule, what we wanted to do.”

Perry Hall has two starters from that state championship team a year ago – Hardnett and 6-foot-9, Ole Miss-bound forward Anthony Higgs (14 points, seven rebounds, two blocks a game) — and Walker, one of Maryland’s top basketball prospects for his breathtaking vertical, menacing length and pure athleticism. Walker (offers from Buffalo, Drexel, St. Bonaventure and VCU) played on the junior varsity team last year to gain game experience, and as this season’s progressed, he’s filling out his lofty potential. On Saturday, he went for 25 points, two short of his season-high, and pounded the offensive glass.

“He’ll tell you, and I’ve been saying it all year, you have to learn to play hard for 32 minutes, not just short stretches,” Panageotou said, “and when you do that, you’re unstoppable.”

Tyler Holley, a Morgan State football signee at quarterback and last year’s sixth-man, is another three-year varsity starter who makes winning plays time and time again. He also stands at 6-5, adding length to a Perry Hall lineup that’s taller than some Division I teams.

Cloud, a 6-2 guard, is Perry Hall’s defensive stopper and is always tasked with the opposition’s most skilled guard. On Saturday, he held Paint Branch’s leading scorer, Richard Dudley (22 points per game), to just five in the second half. Then there’s Xavier Gravette, a 6-4 senior forward signed to play football at Morgan State as a receiver.

The Gators’ roster, in terms of measurable and superlatives, is unmatched in Maryland public school high school basketball: three Division recruits at 6-8 or taller, five Division I athletes, seven players at 6-4 or taller and three starters who have already made two trips to the Final Four.

And even though Perry Hall should be considered as double-figure favorites against a Gaithersburg team with not a lot of size (tallest player stands at 6-4) and loads of youth, Panageotou knows it’s March, the month of madness and upsets, and anything short of a win means a storied run comes to a premature halt.

“One slip up, and we’re packing up,” Panageotou said. “I want them to embrace the finality of it. … The message is staying focused for two more. It was a challenge learning how to defend a title, instead of going out there and being hungry to win it. That hunger is back. We’re there. Two more games for a repeat.”