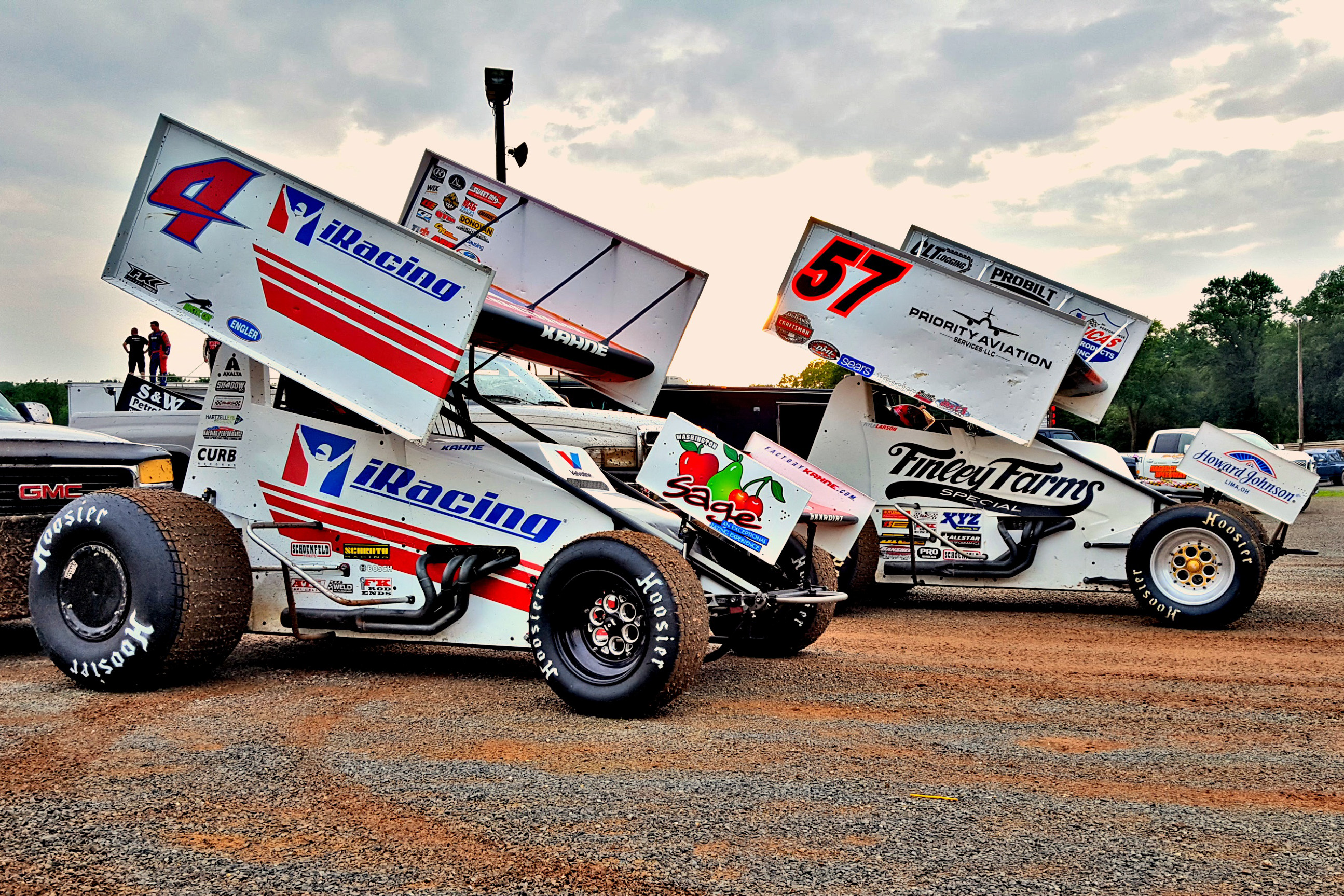 HAGERSTOWN — As soon as Kyle Larson toted his white No. 57 410 sprint car back to where his massive race hauler parked in the infield of Hagerstown Speedway, a herd of fans migrated toward the 24-year-old racing star.

After a non-factor 11th place finish in the sixth of 10 races in Pennsylvania Speedweek, which snapped a six-race win-streak on the sprint car circuit, Larson exited the cockpit that discharged with steam to the few-dozen patrons who had now fenced the rear of his hauler. Moments later, Larson began posing for photo ops and scribbling his signature on pieces of memorabilia that lasted a good half hour.

Minus the large quantities of fans and long lines for autographs, it’s a routine Larson has conducted since childhood. Dirt racing is where he got his start, and through the years, a following has bolstered and segued him to present day fame. Through 17 of 36 races in the Monster Energy NASCAR Cup Series, Larson has picked up a pair of wins and sits first in points.

The Elk Grove, Ca., native sure didn’t race the Wednesday night 30-lap feature for the winning payout of $5,000. Instead it’s about manifesting roots and giving back to a community that gave so much to him.

“It’s cool that I’m running good in NASCAR and got a lot of eyes on me there, so when I come for sprint car stuff, and run good, [people] notice it, and it just brings good attention,” Larson said. “Stock car racing has gotten bad attention over the last few years. It’s nice to see a little bit of a change. … Love seeing the passionate fans and a packed house.”

Larson, who qualified for 18th, struggled to find grip on a greasy racing surface due to the pockets of rain that came in and out Wednesday in Hagerstown. On Sunday, Monday and Tuesday, he won at Path Valley Speedway, Lincoln Speedway and Grandview Speedway, all in Pennsylvania.

“It was a really successful trip,” said Larson, who will now put his focus on the Quaker State 400 at Kentucky Speedway on Saturday night. “Three wins out of four races, which was nice. I just didn’t qualify very good tonight.”

Larson wasn’t the only driver with NASCAR status in Hagerstown on Wednesday. Two haulers down settled the race unit of Kasey Kahne, who has 17 career Monster Energy Cup Series wins in 14 seasons and wheels the No. 5 for Hendrick Motorsports in the Cup series. Like Larson, his hauler swarmed with hungry fans searching for autographs and photo ops.

“I try to get it in every once and awhile,” Kahne said of traveling the dirt circuit. “I enjoy this type of racing. It’s where I started, where I learned. I always try to stay close to it. These are some neat tracks. Four nights in a row of racing is always good.

.@kaseykahne: "I enjoy this type of racing. It's where I started, where I learned. Always try to stay close to it. … It's my getaway." pic.twitter.com/8reOEKuLIL

“What it does is, I can kind of just do my own thing,” added Kahne, who finished one lap down in 17th place after starting in 15th of 24 A-main participants. “This is all my stuff. I enjoy just getting away for a minute and just doing my own thing, and not having to worry about things I can’t control. … [Hagerstown is] a neat track. It’s a track I really like. I enjoy the fans, how they support the dirt racing up this way.”

Some 100 yards over on the north end of the speedway was Dave Blaney, who spent 17 years in the Cup series. Blaney won his heat race and started in second place, but stumbled to a 15th place finish, 19.5 seconds behind winner Lance Dewease. He’s also the father to Ryan Blaney, recent winner on the Cup Series at Pocono Raceway, and races part-time on the sprint car circuit.

“We enjoy coming here,” Blaney said. “We just pick and choose, having fun. I just enjoy doing it. … [Life] is good. Been having fun watching Ryan; going with him a lot. It’s been fun to watch.”

Then sandwiched between Larson and Kahne was Rico Abreu, nationally renowned auto racer and part-time driver in the NASCAR Camping World Truck Series. Abreu finished third and ran second for a good chunk of the night. He, as well, held a meet-and-greet session after the racing subsided.

“It’s a great week where you can get a lot of racing in a short amount of time,” Abreu said. “These are all new tracks to me, and fans, that I get to interact with. So, it’s all fun. … It’s great [Kyle Larson and Kasey Kahne] get to come back to this grassroots racing and spend time, sign autographs for all the fans who don’t get to see them race all the time. I know, at the end of the day, this is their real passion. It’s what got them where they’re at right now.”

Thank you @Rico_Abreu for allowing my daughter to take a picture with you tonight! pic.twitter.com/Jfm72YjtLm

As for the event, 21-year-old Freddie Rahmer started on the pole and led the first 26 laps, until Dewease made a slick go-ahead pass on the back-stretch with four laps to go for the win. Rahmer finished second, Ryan Smith placed fourth and Danny Deitrich rounded out the top five.

“Guys like myself, Kyle Larson, Tony Stewart, we enjoy this type of racing,” Kahne said. “You go, as a fan, and check it out — look at it, and realize it’s pretty cool racing as well, like NASCAR. It’s kind of what we all bring to it by doing this. We all do it because this is what we grew up doing. We enjoy it, and just enjoy racing.”