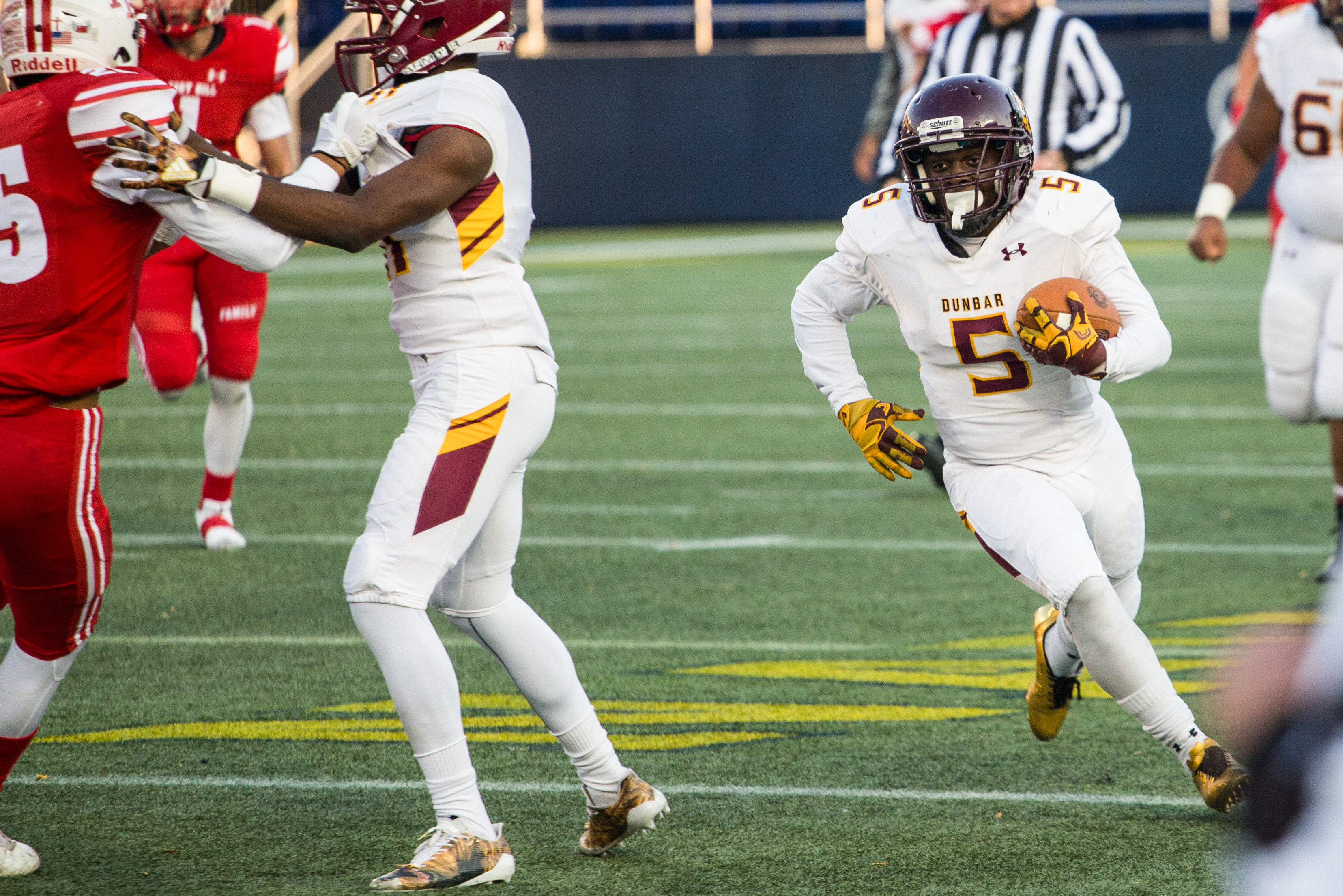 ANNAPOLIS — After giving up 26 points in the first half, Dunbar shut down Fort Hill in the second half to claim the Maryland Public Secondary Schools Athletic Association Class 1A state title at Navy-Marine Corps Memorial Stadium on Saturday afternoon, 30-26.

It’s the school’s 10th football state title and first since 2012. Quarterback Jared Lewis went 7-for-17 for 252 yards and three touchdowns through the air. Raekwon Walker totaled 88 yards and a touchdown on four receptions. Dunbar outgained Fort Hill in total yardage, 429-245.

In its first five plays from scrimmage, Dunbar put up 16 points. Andre Brandon followed his blockers down the right sideline for a 68-yard opening salvo, and after Lewis found Demond Jackson in the back corner of the end zone for the two-point conversion, it was 8-0. On the second touchdown, Demond Jackson took a short pass 63 yards to the house, breaking a bevvy of tackles in the process for a 16-8 Poets lead.

Fort Hill responded on both of Dunbar’s scores. The Sentinels put together an eight-play, 68-yard drive that was capped by a 21-yard touchdown pass from Logan Johnson to Brayden Poling. On the second, Poling ended a 12-play, 77-yard drive with a 17-yard scamper to make it 16-16 at the 11:54 mark in the second quarter.

The Sentinels forced a Dunbar 3-and-out on the following possession and took advantage of prime field position, starting at the Poets 25-yard line, when Banks muscled into the end zone from four yards out. That score made it 23-6, Fort Hill, with 8:16 left in the second quarter, and would be the last time the Sentinels crossed the plane for the day.

Dunbar responded with a 5-play, 80-yard drive when Lewis launched a 60-yard scoring pass to Walker. Lewis fell short on the two-point conversion, and Fort Hill maintained a 23-22 lead with 6:45 left in the second quarter.

Danny King knocked through a 47-yard field goal with 46 seconds before the intermission to pad Fort Hill’s lead, 26-22.

From there, the Poets stifled the Fort Hill offense, holding the Sentinels to 52 total yards in the second half. Ryan Wood produced the go-ahead touchdown when he took a screen pass from Lewis and raced 87 yards to the end zone. The score gave the Poets a four-point lead it wouldn’t relinquish with 2:47 left in the third quarter.

This story will be updated.