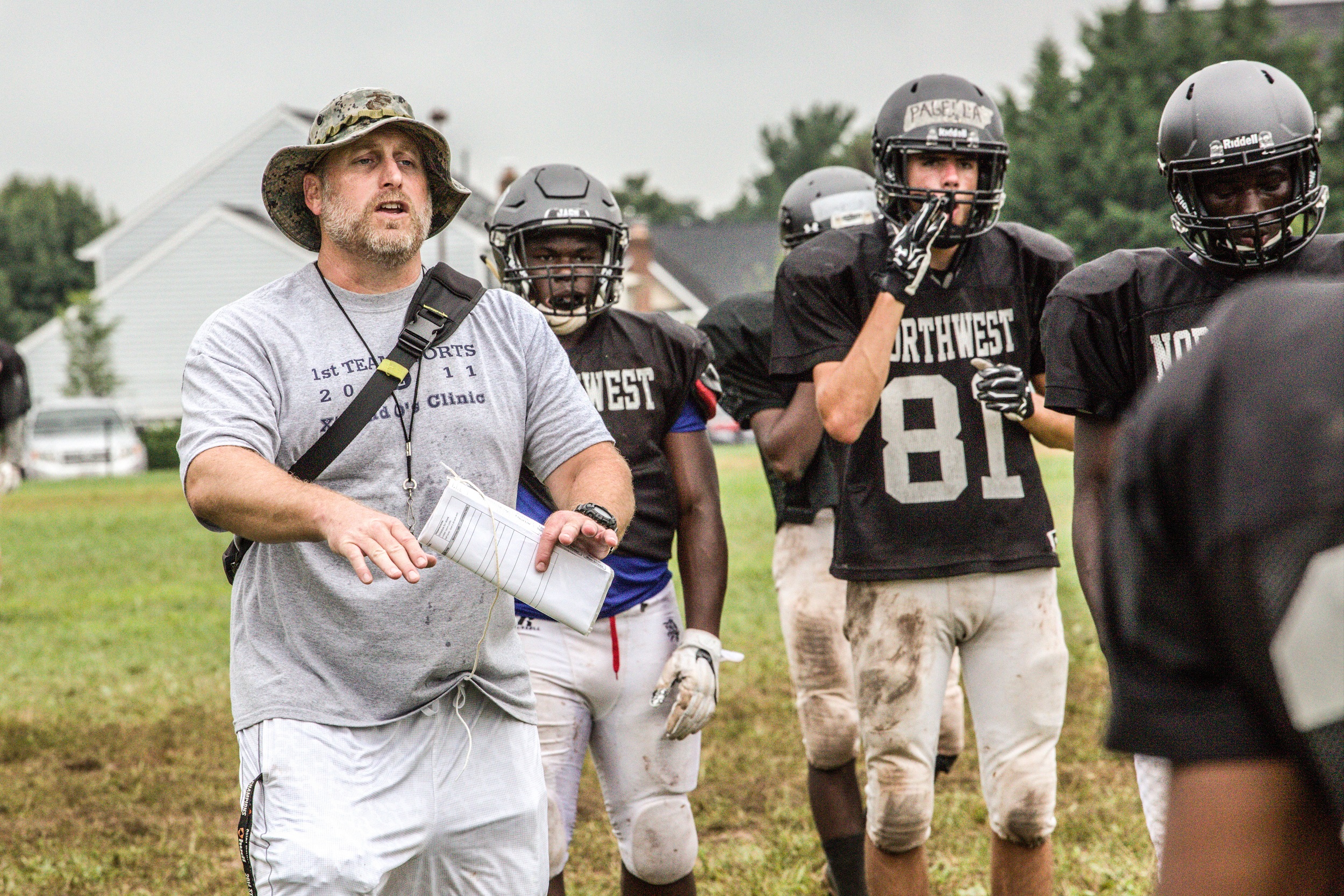 Leading up to Week 1 of the high school football season on August 24, I’ll be traveling around to Maryland-area gridiron camps in a preseason tour. You can follow me on Twitter @k_fadd for information and stories and email me at kfadd32@gmail.com.

Other notes: Pennsylvania All-State defensive lineman Daniel Worthy (6-1, 235 pounds) transfers into the program; Pat O’Donnell moves up from junior varsity to take over as the offensive coordinator; former Virginia Tech quarterback Ike Whitaker now serves as the QBs coach; Miles Gray comes from Springbrook to work as the receivers coach.

Week 3 vs. Seneca Valley (Sept. 14) — Big-time rivalry games are usually slated at the end of the year. But for these two schools separated by just three miles, the King’s Trophy of Germantown comes in Week 3. This game has acted as a springboard in the past and another domino for prospective students who have the luxury of their school of choice. Just ask Ajahni Terry, who played for Seneca Valley his freshman year, and now plays an important role as a junior for these Jags.

Week 5 vs. Good Counsel (Sept. 28) — The Jags lost this game by five touchdowns a year ago and will be heavy underdogs once again versus the nationally-ranked Falcons. Nonetheless, though, this matchup has turned into a highly-anticipated one in Montgomery County, pitting two county stalwarts from the public and private scene — a rare matchup in today’s gridiron world.

Week 9 vs. Quince Orchard (Oct. 26) — This is, arguably, the cardinal rivalry in Montgomery County these days. Six of the last seven Class 4A final berths have been either Northwest or Quince Orchard and 2018 appears no different. The Cougars have handed the Jags three of their last five losses, dating back to Week 7 of 2016. And if Northwest wants to get back to the title game for the first time since 2014, getting past QO is almost necessary.

Sporting flat-black helmets and white jerseys, sixty-some Jaguars barrelled back-and-forth across the field outside Richter Farm Road, through the ankle-high grass, zipping and trudging from line-to-line in these series of sprints.

Eighth-year coach Michael Neubeiser stood at the start-finish line, overseeing his fresh crop of talent for this new season while assistants kept the Jags in check — either demanding players to show more effort or tread lighter to avoid potential injury.

Once those dreaded dashes ended, Neubeiser whistled his squad over and ordered players to take a knee as practice No. 2 came to a close.

“Good work today. … I believe we got better,” Neubeiser told his group. “When we get tired, we struggle to compete and focus. … You just gotta suck it up and do your thing.”

It’s been four years now since Neubeiser guided Northwest to back-to-back titles in 2013 and 2014, meaning every player from that landmark run has graduated. Since then, the Jags have seasons of 9-4, 7-4 and, most recently, 9-3 — all respectable runs, but not fulfilled considering the respective talent from each unit.

This season, the pieces are in place for Northwest to make a state title push once again and two factors will likely fuel or burn those prospects: Consistency and leadership.

“If you’re talking broad terms, I think those teams were more consistent, in everything,” Neubeiser said when asked about the difference between title seasons in 2013-14 and the last three years. “And it all carries over, in all facets of your life. I tell these kids all the time if you’re a guy that comes late, tardy to class, has problems, it’s going to carry over on the field. There’s no way around it. You can’t turn those things on and off.”

Neubeiser truly believes the talent over the past three years was either at the level of those from 2013 and 2014 or pretty close to it. The separator, however, was in between the lines. Though key injuries put a damper on last season, the Jaguars were often their own worst enemy, taking penalties that halted surefire scoring drives and failing to execute simply because of a lack of focus, which proved to be the deciding factor in both Quince Orchard losses.

“Not to throw anyone under the bus, but we have guys playing in college right now, who we were counting on to be leaders, not here when we were starting practice,” Neubeiser said. “It’s like, what are you doing? So, how can you lead when you’re not doing all the little things right yourself?”

Even though it’s early (I mean, the season is two days old), signs have pointed in a positive direction — “We don’t have kids on this team who just don’t show up,” Neubeiser said. “They’re all here, they’re all on time. And that hasn’t happened in the past.”

The Jags are set to bring back half their starters from a year ago, including a defense bolstered with Division I talent and a three-headed, college-bound backfield.

Senior DB A.J. Woods and senior DE Deandre Jules, both Pitt commits, lead the way for Northwest’s intriguing defense. Woods clocked a 4.41 40-yard dash at the Nike Opening this past summer and Jules towers at 6-foot-4, 247 pounds. The senior defensive end is also fully healthy and cleared for full contact after playing just two full games last year due to a torn meniscus.

Senior LB Isaiah Bishop, holder of 10 Division I offers, added 30 pounds of muscle (180 to 210) over the offseason and mans the linebacking corps. Junior Ajahni Terry, who also suffered a torn meniscus early last season, returns as a linebacker at a burly 5-9, 210-pounds — and could, quite possibly, be the hardest hitter in Montgomery County.

Daniel Worthy is a welcomed addition to the Jags, transferring from Pennsylvania as an All-State interior defensive lineman. Worthy stands at 6-1, 235 pounds and is “everything you want” in a lineman, Neubeiser said.

On offense, senior QB Jack Anders (6-2, 195 pounds) is set to take over the reins after sitting behind former starter and recent graduate Chris Craddock for two years. Really, though, Anders has been preparing for this role since seventh grade — when he entered the Northwest feeder system and frequently attend (and still attends) camps and clinics at Quarterback Factory.

“For the second day, I’m really happy for what we saw, what we’ve seen. First team has been rolling,” Anders said. “This group of guys have been playing with each other since ninth grade. … Sitting behind [Chris] and really understanding where people are supposed to be, what I’m supposed to do, how to be a leader, it was definitely helpful going into this last year. I can express all of that now.”

The backfield will consist of Terry, the hard-running Bishop, as well as James at fullback and a few handoffs here and there from Woods. Up front, Neubeiser finally has some depth to keep players going from both ways with seven to eight guys are battling for positions. Junior T Patrick Diomi (5-11, 215 pounds), senior G Josh Maradiaga and senior C Jack Thomas (5-11, 195 pounds) figure to anchor a stout running game that will force teams to stack the box and ultimately open up the playbook for Anders and company out wide.

That is the hope, along with developing championship-caliber cohesiveness and stable leadership. By November, a clearer imprint should appear. And for now, we’ll just have to wait and see where the dominoes tip this time around.

“This group, the leaders we have in this group, are good and reliable and consistent,” Neubeiser said. “That should go a long way.”