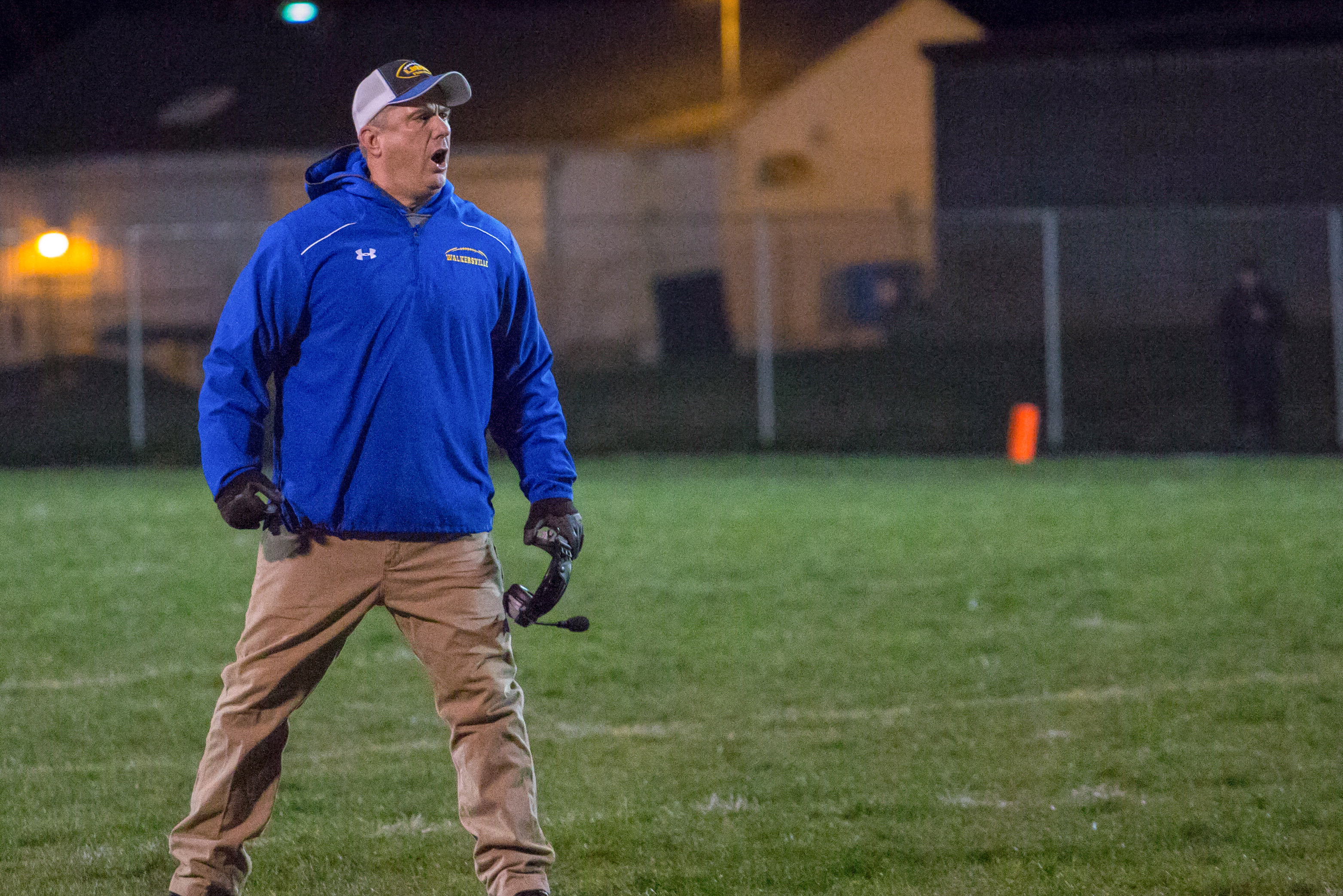 Leading up to Week 1 of the high school football season on August 24, I’ll be traveling around to Maryland-area gridiron camps in a preseason tour. You can follow me on Twitter @k_fadd for information and stories. You can also email me at kfadd32@gmail.com.

Style of play: Pro and Twins-I offense / 4-3 base defense

Other notes: The Lions graduated 19 of 22 starters and lost three of five assistants from a three-year run that saw 36 wins, two region titles and a state championship (2016). Don Duman comes from Oakdale to take over as the defensive coordinator; Lee Palmer moves up from the junior varsity team to act as the running backs and linebackers coach; Greg Jackson also moves up from the junior varsity team, serving as the offensive line and defensive line coach.

Week 5 vs. Linganore (Sept. 28) — The Lions have outscored the Lancers 67-10 the past two seasons, but this time the roles are reversed. Walkersville will welcome the reigning 3A state champion Lancers to the Lions Den and receive their first true test of the season. Luckily for them, they have a month and a half to get things situated before a treacherous last half of the season. If all goes according to plan, both of these teams should be 4-0 when Week 5 comes around.

Week 7 vs. Tuscarora (Oct. 12) — Linganore and Oakdale are clear-cut favorites in Frederick County, but outside of them, it’s a toss-up between Middletown, Tuscarora and Middletown for third. If Walkersville wants to create some late-season momentum and separate itself, this one is a must-win against a wild-card Tuscarora team with a lot of speed.

Week 9 at Oakdale (Oct. 26) — This might be Walkersville’s toughest regular season matchup and a potential playoff meeting. Oakdale has one of the best QB-RB duos in the state in Collin Schlee and Simeon Sabvute and are, in my mind, 1B in the 2A West, slightly behind powerhouse Damascus. Week 9 feels like an eternity away but carries county and playoff implications, as well as a measuring stick late in the season whether these Lions are built for another run.

Week 10 vs. Middletown (Nov. 2) — The last week before the playoffs against your biggest rival, who happens to be in the 2A West. This game could carry major post-season weight.

Walkersville football coach Joe Polce put his hands on his knees, surveying all 11 defenders, but primarily keying on the eight who are new to this kind of expectation. This was just the second day of practice, the second official team event since the gut-wrenching, yet epic, 7-3 loss to Damascus in the 2A West final last fall — a game that garnered over 6,000 spectators and historic implications.

So, there stood Polce, in a field behind the stadium that evokes endless memories and housed the most accomplished class in program history — 36 wins over three years with two region titles and a state championship.

“Pick it! Pick it!” Polce shouted to one of his defensive backs covering a drop-back pass. Instead, the ball bounced off a colliding pair of hands and landed harmlessly in the grass.

“Ah, darn it. That’s all right,” Polce said, his voice mellowing. “We’re where we’re supposed to be.”

Walkersville graduated 24 of its 42 players from last year — 19 of which were starters — and just two remain from the 2016 state championship unit, segueing the Lions into 2018 with a host of unproven faces and uncertain expectations, at least from an outsider’s view.

Despite the roster turnover, Walkersville believes it can still compete at a high level, a state-championship level — even in a loaded 2A West region — and refuses to accept 2018 as a rebuild.

“I feel like we have a ton of talented kids,” Polce said. “We just have to make sure we get them all in the right spot, get them all going in the same direction, and just build with it; keep getting better each and every day. If we do that, then we’ll have a very good team. … It’s actually fun: Starting over and coaching them. That’s what we love to do. Everything is new and it’s exciting. Kids are listening and taking it all in.

“If they want to count us out, that’s good. We’ll surprise them all.”

When no starters return offensively and eight graduate from a defense that allowed just 7.1 points per game last year, it’s natural to predict some sort of dropoff. But those predicting these Lions will fall from a top-five team statewide to a sub-.500-or-worse state may be thinking too dramatically.

For starters, five of Walkersville’s opponents this fall went under .500 last year and two wins against winning teams (Liberty and Wootton) ended in 56-0 and 76-7.

Sure, over 80 percent of their ground-and-pound offense have graduated (Jacob Wetzel, Ty Littleton, Christian Policelli and Tyler Gleason), but four solid ball-carriers remain. Sophomore Josiah Jones, who ran for 230 yards and three touchdowns on 40 carries last year as a freshman, already holds an offer from Division I Howard. His stature (6-foot-1, 185 pounds) is built to carry the Lions’ smashmouth offense. He also runs a 4.75 40-yard dash and is expected to get the ball roughly 20 times per contest.

Senior Alonso Hoes, a 6-foot-1, 205-pound defensive end who runs a 4.6 40-yard dash and has an offer from Division II West Virginia Wesleyan, is expected to get a dozen or so touches on offense. Mark Merica, another sophomore, and Nick Edwards, a big-bodied junior, are in the running back rotation as well.

“I’m excited,” Jones said of his expanded role. “People don’t expect us to be good, so we’re practicing harder.”

Up front, juniors Alex Rice (6-2, 275 pounds), Will Beall (6-1, 225 pounds) and Ben Hartman (6-foot, 200 pounds) and sophomores Xavier Ricks and Hunter Dilley figure to hold down the fort. Polce said his o-line averages around 250 pounds as a collective group and have “linemen bodies,” it’s just polishing and heightened aggression needs to happen in order for their signature punishing attack to continue.

Under center, senior Elias Baroudi (6-3, 205 pounds) and sophomore Andrew Stroka (5-11, 175 pounds) are in a competition for the quarterback job, though Baroudi, who played a pivotal role as a linebacker last year, is getting most of the reps with the first-team in practice.

“We’ll see how it progresses,” Polce said of the quarterback competition.

Baroudi, a baseball player most of his life, last played quarterback in seventh grade and returned to the sport after a three-year layoff last year. He didn’t start right away but carved out an important role in the linebacking corps by Week 6, and now, after the program lost three-year starter Billy Gant, is asked to fill that coveted role.

“He’s a great athlete, he’s a tough kid,” Polce said of Baroudi. “He’s a leader. He does what you expect. He brings leadership and toughness to our team that you want out of a quarterback. He’s also a good runner.”

Baroudi used 7-on-7 tournaments over the summer to get accustomed to the varsity speed, understand coverages and routes better, as well as building rapport with receivers. When asked about the most challenging thing jumping into a quarterback role after not playing it for five years, Baroudi said, “Commanding the offense. You have to be the leader out there. You have make sure everyone is in check and things run smoothly. Also have to hold guys accountable. Just being a vocal leader.”

Last year, Walkersville averaged exactly seven passes per game and 27.6 rushes — an 80-20 ratio; so, Baroudi won’t be asked to do too much with his arm. On the other hand, ball-security and being diligent, especially at Walkersville, is paramount.

Defensively, the Lions will switch from a 3-4 front that showcased their veteran LB corps to a 4-3. While eight starters from that reliable unit are gone, Hoes, Baroudi and defensive end Myles Roberts are back. Hoes and Roberts will bring a sliver of that dominant defense back on the edges. They’re also the only two players left from the 2016 state title team.

“They’re both aggressive and hard-nosed kids,” Polce said. “They’re going to be tough to block.”

Freshman Logan Joiner (6-foot, 245 pounds) will plug the gaps at defensive tackle. Baroudi will anchor the linebacking crew and Jones will go both ways, playing cornerback on the right side of the field.

When you boil it down, Walkersville strips football down to its purest form: Pound the rock, possess the ball and play a mean defense. At first sight, likeminded pieces appear to be in place once again for the Lions to fit that description.

“I think we can get in the same mold of all the Walkersville football teams: Power run, control the ball, no penalties, no turnovers, play great defense,” Polce said. “Defense and running game don’t really ever go out of style.”

At the moment, Walkersville’s 38-man roster consists of 10 sophomores, the most since 2015, when 11 of 39 players were sophomores. That season ended in an unexpected trip to the 2A state title game.

“I think the foundation is laid. Now the guys know how to do it. So, I’m hoping — everybody says [give us] three years — hopefully, that’s just a building block and these guys can pick up and continue [to win]. The tradition is set. You just have to keep moving forward.”