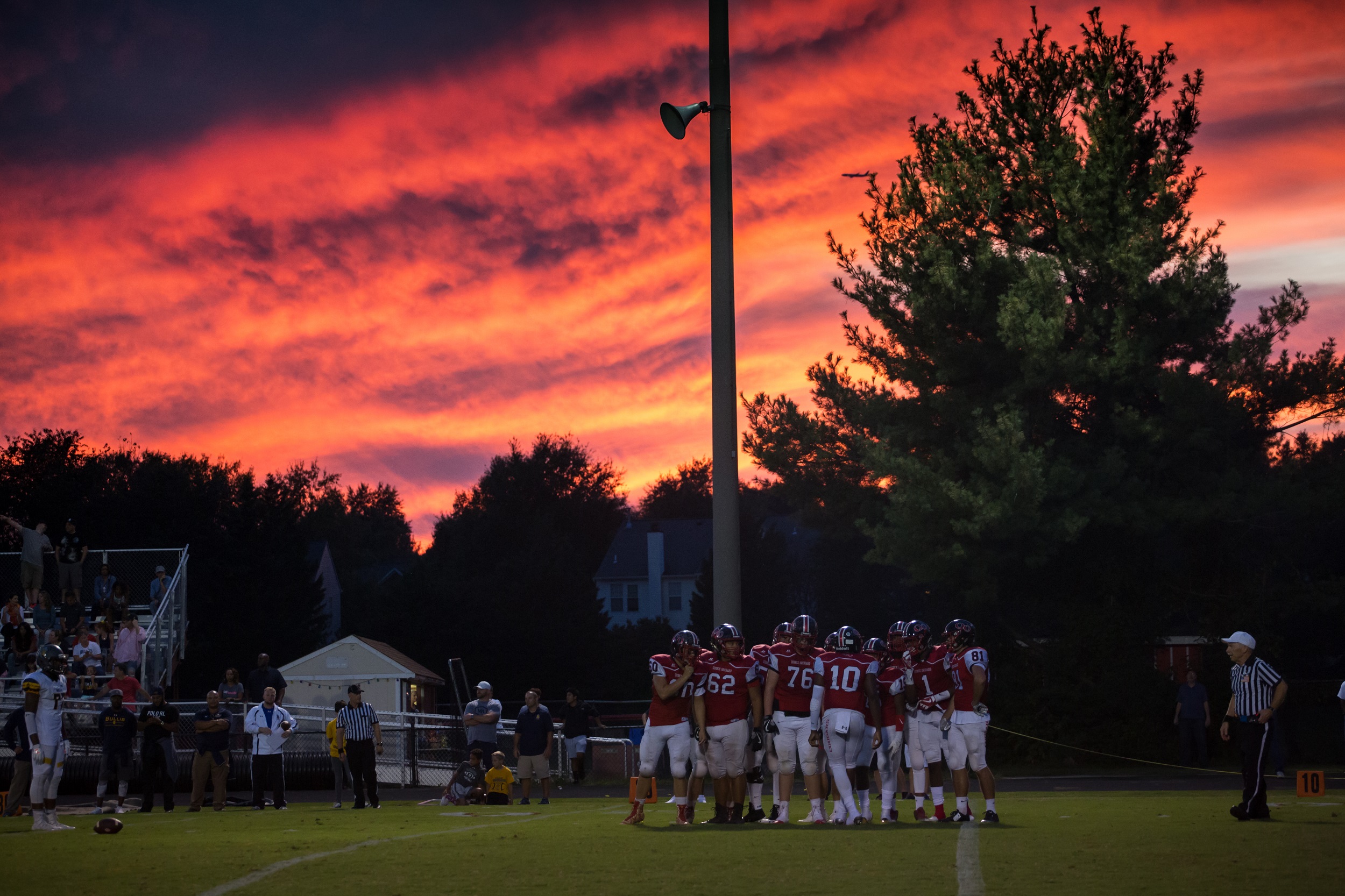 As my Frederick News-Post colleague Greg Swatek wrote in a recent article, the difference between starting the season 1-0 or 0-1 is astronomical.

Each week, every coach in the state — or across the country for that matter — aims to build one moment after another through the end of Week 10, and if you’re fortunate enough to make the playoffs, then the target is refocused on the big prize. But a loss out of the gate is an unwanted blemish on this fresh opportunity. A win out of the box, however, doesn’t define a whole summer’s worth of work but it certainly pushes a team one moment closer.

That theory, though, can be worked against if harnessed the right way. Last year, Tuscarora ramrodded Milford Mill, 38-14, in high school football’s opening weekend. The Titans entered the season ranked in the Maryland media poll and the Millers weren’t really in that conversation — so the result wasn’t too surprising.

What transpired next, however, is Exhibit A on how getting man-handled can offer a healthy reality check and possibly steer a team on the right path. Milford Mill made adjustments to a defense that allowed over 300 yards rushing and rattled off 12 straight wins, all the way to the Class 3A title game versus Linganore — a contest they lost 28-27, but led 19-0 before the Lancers pulled off a comeback for the ages.

After the statement win, Tuscarora stumbled to a 4-6 record and missed the playoffs in a light 3A West.

Exhibit B could be Allegany vs. Dunbar. The Campers outdueled the Poets at home in a shootout, 49-42, on opening night last year, but Dunbar went on to win the 1A title while Allegany failed to make it out of the West.

A Week 1 loss, or a Week 1 win, certainly won’t tell the whole picture, but it surely sets the table for a story-filled 2018 season. With that being said, Week 1 is finally here. Below are some games to monitor as well as storylines to track as a new season dawns.

You can follow me on Twitter @k_fadd for high school football news as the season rolls along.

— My preseason rankings coupled with a preview for each ranked team

— My column, ‘Familiar foes in the back of their minds’ in the Frederick News-Post, featuring the programs of Damascus, Linganore, Milford Mill and Oakdale

Hey, y'all, I hopped on the @FrederickSports Final Score podcast last night with @greg_swatek, @john_jcannon and @joeferrarofnp to talk Frederick County football and beyond. Listen here: https://t.co/LWHommrzhu

2018 football preview: As the season gets going, four teams from around the area prepare in different ways. https://t.co/uc6yPzeYBh

Coaches and players at Centennial High thought the school felt hollow without a football team last fall. Now football is back. https://t.co/zog9SwLigd

As many new, younger football coaches enter the high school ranks, and veteran coaches seek to try something new, the game has picked up speed and communication techniques have changed. https://t.co/xIiXBDMJbV

The Week 1 game I used to look forward to was Damascus-Quince Orchard, but since Montgomery County took that meeting away, it’s now become Milford Mill-Tuscarora and I’m more than fine with that. I’ve been eyeballing this one all summer: A measuring stick for two title contenders in Class 3A, one who returns a boatload of impact players from a backbreaking 28-27 loss in the title game last year and the other with Division I talent across every skill position.

There’s some added spice as well: Tuscarora whipped up on Milford Mill, 38-14, on the Millers’ home turf in this game last year. This time around, the roles are kind of reversed, except Tuscarora hasn’t played in a big-time playoff contest as of late.

Milford Mill enters 2018 ranked 15th in my preseason rankings and 18th in the state media poll, having returned 12 starters from a 12-2, state runner-up season. Division I players Brandon Savage (QB and DB) and Ugo Obasi (WR and DB) have graduated, but most of Milford Mill’s core remains intact, namely RB/LB Desmond Shell and leading-tackler Kevin Neal. Under center, sophomore Rishon Holmes takes over the offense. Holmes was supposed to start last year as a freshman, but Coach Reggie White and staff decided to wait another year for developmental purposes.

As for Tuscarora, a win on Friday would ripple a statement across the state and provide confidence for the long haul. The Titans could have easily gone 8-2 last year, but miscues and lapses resulted in a disappointing 4-6 season. They certainly have the pieces: dynamic running back Aris Hilliard, Division I recruit at receiver Jordan Addison (offer from Maryland), 6-6, 260-pound lineman Matt Belcher and touted 6-2, 200-pound, freshman quarterback Brian Jester. It’s just: Can it come together?

Prediction: Milford Mill 34, Tuscarora 17. With athletes across the board, what’s the deciding factor? The line of scrimmage, of course. At first glimpse, the Millers are hefty and reliable in that department, and apparently hung with back-to-back-to-back 4A state champ Wise in a recent exhibition. The Titans, meanwhile, have traditionally struggled up front, especially with execution. Even though they ran for over 300 in this game last year, I think Tuscarora will have a difficult time making gains on the ground. Milford Mill is employing a completely different defense, and the mentality is much different, too. Not saying Titans QB Brian Jester can’t carry the load through the air, but that’s a lot to ask out of a frosh signal caller in his first varsity game. On the other side, sophomore Rishon Holmes is also making his first varsity start under center. So, we’ll see how efficient the Millers move the ball. The Millers have been laser-focused all summer to get the 2K18 campaign underway and I don’t see how they let this one slip away.

Who do you think will win?

My Game of the Week is No. 18 @WearemilfordFB at @THSTitans. Millers went 12-2 last year & lost in the 3A title game to Linganore. Though the Titans went 4-6, they were one of two teams to defeat MM im 2017 & employ an intriguing roster this fall. Who ya got?

Other games to watch

No. 1 St. Frances (0-0) vs. St. Joseph’s Prep (1-0), Friday at 7 p.m. at Capital One Field: The Panthers have already won the 2018 MIAA A Conference title due to a series of forfeits. Now, their sites are on becoming the best team in the nation. A convincing win over a top Pennsylvania school would be a good start. Prediction: No. 1 St. Frances, 42-7.

No. 5 DeMatha (0-1) at Imhotep Charter (1-0; Philadelphia), Friday at 7 p.m.: After suffering the most lopsided loss in the eight-year Elijah Brooks era — a 38-0 defeat to nationally-ranked St. Thomas Aquinas (Fla.) — the Stags look to get back on track at Philly perennial Imhotep Charter. Prediction: No. 5 DeMatha, 28-10.

No. 10 Damascus (0-0) vs. Blake (0-0), Friday at 6:30 p.m.: Even though I fully expect Damascus to win (I mean, they’ve won three straight titles and ride a 42-game winning streak) I think this game will be closer than last year, when the Hornets won 41-17. Take it for what it’s worth, but the Bengals beat No. 8 Bullis in a scrimmage and have the athletes to make something happen. But in the end, and like it has so many times before, Damascus’ smashmouth approach will be too much to handle. Prediction: Damascus, 38-20.

No. 20 Dunbar (0-0) vs. Allegany (0-0), Friday at 7 p.m.: 19 combined state titles tell the picture of these two football rich programs, and for the second year in a row, they open up versus one another. Last season, the Campers won in a shootout, 49-42, handing the Poets their only loss in a 12-1, 1A title run. Expect Dunbar to exact revenge on home soil. Prediction: Dunbar 35, Allegany 21.

North Point (0-0) at Old Mill (0-0), Friday at 7 p.m.: The Eagles ran over the Patriots last year, 42-0, behind strong performances from playmaker Chelen Garnes and quarterback Jemichael Jones. But this season, North Point will have to do it without Garnes and Jones, as well as top lineman Rasheed Walker, who are all off at college. Old Mill, which went 7-3 last year and missed the playoffs, is expected to make a postseason return this year. So who knows what this one brings. Prediction: North Point, 20-14.