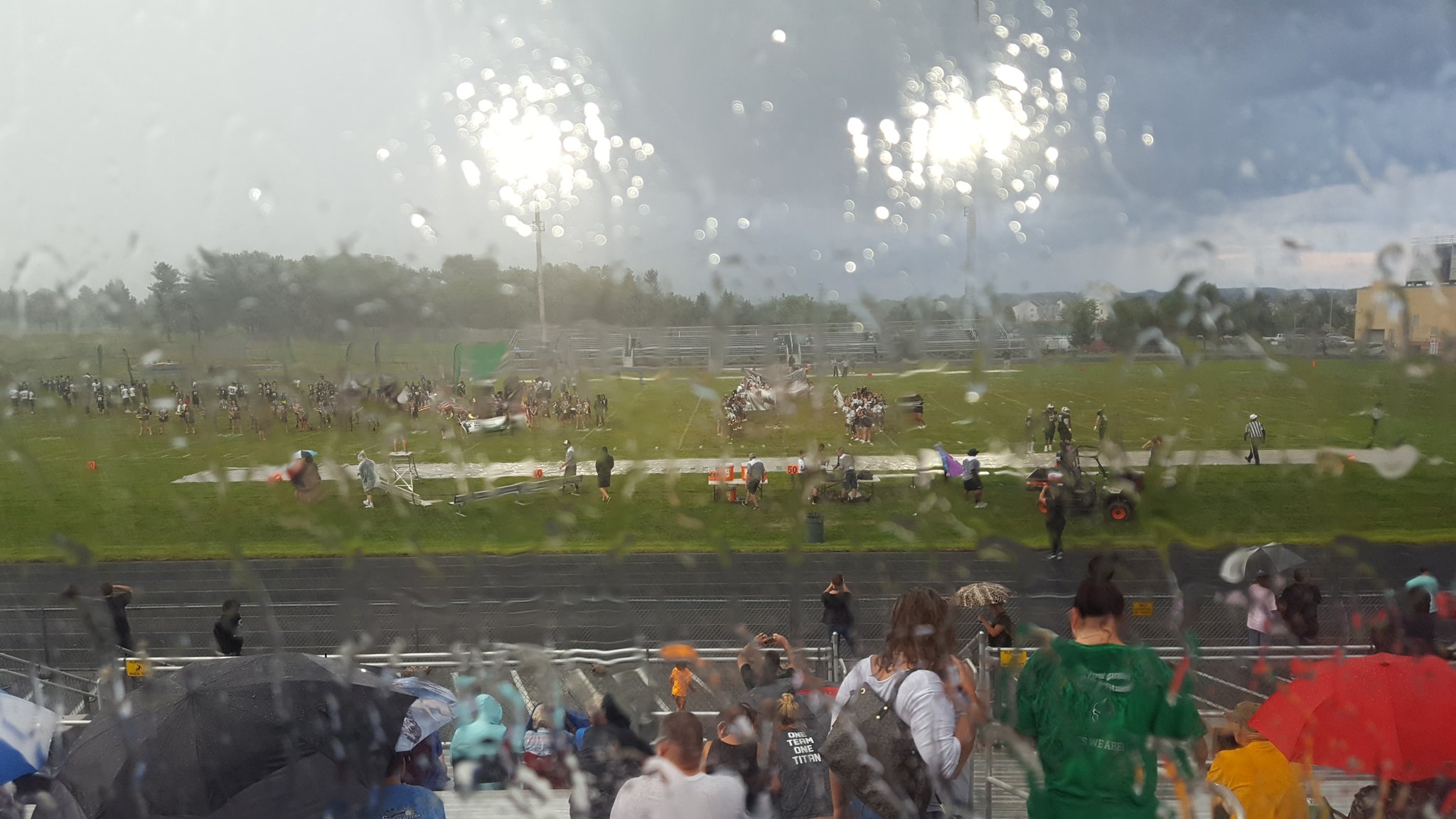 What a weird, weird opening night of high school football. So, I roll up to Tuscarora High School for my Game of the Week — No. 15 Milford Mill vs. Tuscarora — and the skies are relatively clear, but the parking lot isn’t even that packed with 40 minutes to kickoff.

I’m thinking, “Are people really staying away because there’s a 20 percent chance of rain?”

Fast forward a half hour: I’m now on the field and the stands are still sparsely occupied with 10 minutes until showtime. A game supposed to be filled with pre-game suspense is instead an atmosphere of calmness. I mean, Milford Mill’s side had literally eight people in the bleachers. From that alone, this opening night felt out of sorts. And now this large, ugly-looking nimbus cloud hangs over the stadium — but it appeared it was going to blow over without busting open.

“I think we’re gonna be good,” I tell one Milford Mill coach.

Nope. It started to spit droplets and then the whole thing dumped down three minutes before kickoff. Fun way to get the season started.

Aaaand the skies have opened. Absolutely pouring now. Ugh. Should be interesting. pic.twitter.com/raxhMwPo7E

Then eight minutes later, at 7:28 p.m. — with 1:36 left in the first quarter and Tuscarora leading 6-0 despite minus-19 yards of total offense — the game was postponed due to lightning. One hour after that it was rescheduled to Saturday at 1 p.m. … then flipped to 6 p.m.

In the meantime (before the game was officially moved to Saturday), I went to a nearby Taco Bell, ordered the Nacho Fries box for dinner and passed some time. My two little brothers were with me, and Ryan, the youngest, ordered first. Then, Austin and I ordered.

Gotta hit up the local @tacobell under this lightning delay. pic.twitter.com/RF2SNxKKZh

We wait five or so minutes and, unexpectedly, Austin and I get our food first. It was actually kind of funny since we all got the same thing. We ordered “to go,” but we both decided to take a seat and start munching while Ryan still waited for his. Three more people walk through the door and order. They get their meals within minutes. Ryan, meanwhile, remained by the register … for 15 more minutes. It was comical. (He eventually got his food after a 25-minute wait).

Then I trekked back to Tuscarora only to find out the game got postponed to Saturday. Bummer, I thought. I check Twitter and see the Damascus-Blake game at Damascus is in a lightning delay, but hasn’t been postponed. So I haul across town, 30 minutes, to Damascus … and was informed that game, too, is postponed to Saturday. Ugh, so this is how Opening Night is going to go. It doesn’t stop there.

I get home, open Twitter (which is a mess to begin with; littered with postponement dates across the state and half-finished games) and see a report that Bladensburg folded its varsity football team for the season HOURS BEFORE ITS 7 P.M. KICK-OFF vs. Eleanor Roosevelt. I’m like “whaaaaat?” This is major news, and they didn’t expect this yesterday, this past week, last week, last month or even all summer? Just gonna wait until kickoff to pull the plug?

I will provide more information in a formal story, but Bladensburg not fielding a football team this year effects Eleanor Roosevelt, Oakdale, Wise, Gwynn Park, Largo, Northwestern, Frederick Douglass, Friendly, Suitland and Flowers because those programs will now play nine games instead of 10, which throws a curveball when it comes to playoff implications. Anyways, we’ll talk about that later.

Game postponed with 46 seconds left? What the … ? Can this night get any weirder? https://t.co/ZYbQcwtgQ8

Probably missed a lot of other whacky happenings tonight, but what a weird, weird opening night of high school football. At least I got some Taco Bell and a good laugh (not without frustration first) out of it.

My tentative coverage schedule for Saturday is to catch the second half Damascus-Blake at 10 a.m. (Damascus leads, 14-6) and finish covering the Milford Mill-Tuscarora game at 6 p.m. I’ll probably find a game in between, too. Stay tuned. You can follow me on Twitter @k_fadd.