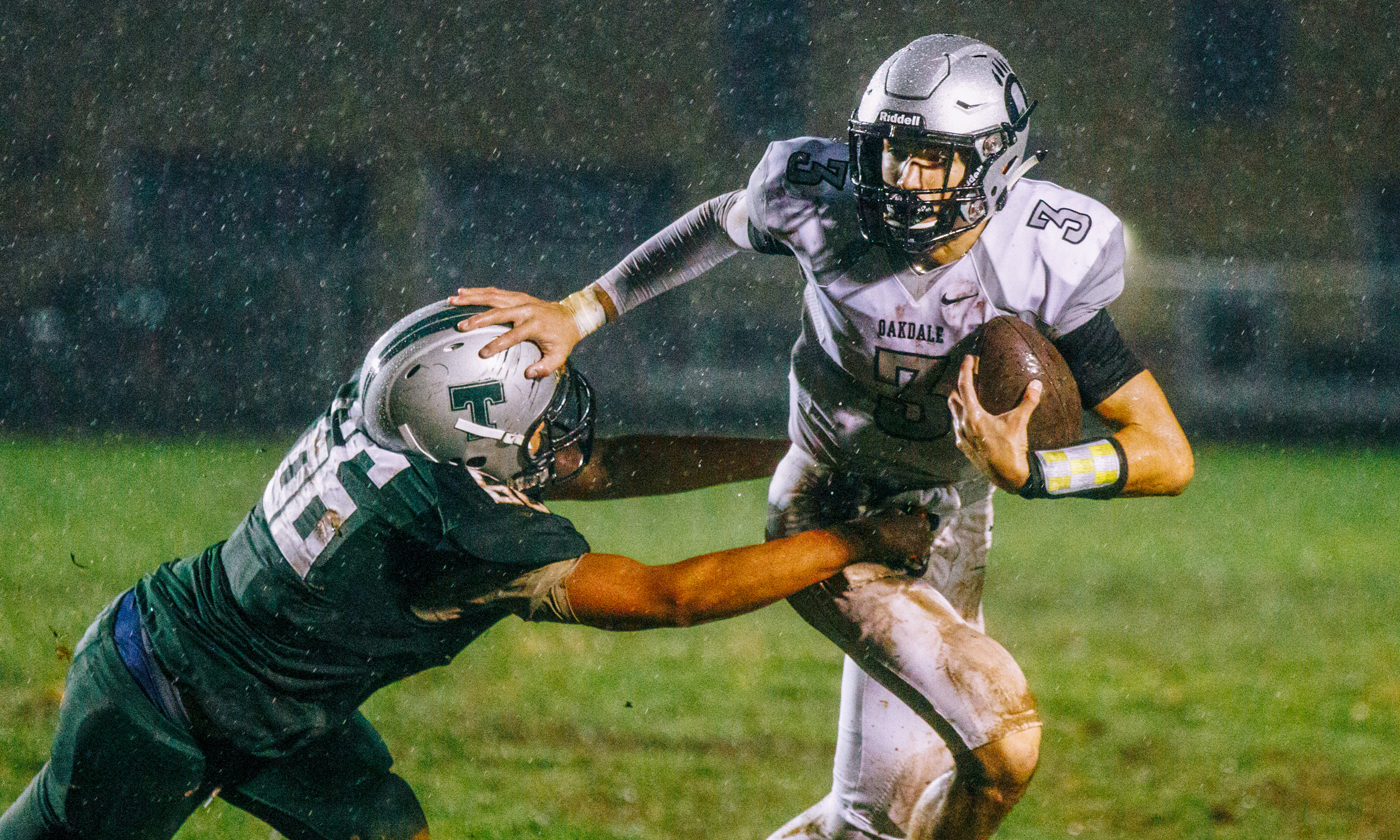 Wise: With Division I quarterback Quinten Williams, West Virginia commit Isaiah Hazel at receiver, a host of other college-bound athletes like Jalil Farooq and a coaching staff that’s won three straight titles, the Pumas are primed for another championship run.

Quince Orchard: Doc Bonner is gone but the Cougars have found a new identity behind running back Marquez Cooper and their efficient offensive line. After losing to Wise the past two years, veteran players like linebacker Johnny Hodges want to finally get over the hump and win it all.

Churchill: The Bulldogs went 9-1 in the regular and have just 1 percent chance of winning the region, according to Massey Ratings. Their only loss came to Northwest, a team they were tied with through three quarters and so happen to meet again in Round 1. With an NFL-experienced coaching staff — head coach Willie Williams played 13 seasons in the NFL and offensive coordinator Chris Samuels starred for a decade with the Redskins, appearing in six Pro Bowls — and dual-threat quarterback Michael Janis, the Bulldogs can upend anyone.

Flowers: The Jaguars have yet to lose and are ranked in the state media poll. Over the past seven games, they’re allowing just three points a contest (19 points). Wise is 95 percent favorites in the 4A South but Flowers’ has the wherewithal to possibly make something happen.

Paint Branch: The computer, and humans, heavily predict another Quince Orchard-Wise state title matchup but the Panthers have something to say about that. They are 79 percent favorites to win the 4A North and if that’s the case, a rematch with Quince Orchard looms (the Cougars won the regular season matchup 24-8 at home). With a hefty offensive line and the right blend of experience and athleticism, these Panthers could be geared for a title run.

4A teams on upset alert

Northwest: The Jaguars are 65 percent favorites against Churchill in Round 1, but nearly lost to the Bulldogs in the regular season.

North Point: The Eagles are the computer favorite to make it out of the 4A East but can’t look too far ahead. They are just 13-point favorites to beat Arundel this week, an opponent more than capable of pulling an upset.

Quince Orchard: The Cougars should handle Richard Montgomery this week and then proceed attentively. They’ll draw either Churchill or Northwest in the region final, one team with an NFL-experienced staff and the other lined with Division I talent. In the semis, a possible rematch with Paint Branch waits, a team they only beat 24-8 in the regular season.

Linganore: The reigning state champs are battle-tested and driven by experience. Many returners are back and ready for another run, headlined by three-year starting quarterback Ryan Leyh (6-5, 230 pounds), speedy receiver Joey Felton (Yale commit), four-year varsity running back Davon Butler, linebacker Jackson Ambush (Albany commit) and college-bound linemen Matt Beekey and Tre Briscoe. Oh, and the coaching staff led by Rick Conner have been together for 16 years.

Franklin: The Indians are odds-on favorites to come out of the 3A North. Led by two-way star Elijah Solomon (1,206 total yards, 70 tackles and 18 total touchdowns), the Indians have outscored teams by 30 points in their eight wins. They hung with private power DeMatha before losing 27-14 and lost to Milford Mill in double overtime, 19-13. A win this week against the Millers would put them at a 60 percent chance to make the title game.

Milford Mill: Ever since their 19-point meltdown in the 3A title game loss to Linganore last year, the Millers have readied for this moment. In 7-on-7s, they donned shirts with the number 14 on the back — representing the number of seconds left when Linganore put the dagger in Milford Mill’s championship hopes. They practiced at 6 a.m. on Saturdays and put in extra hours in the weight room. There are new offensive leaders, namely sophomore quarterback Rishon Holmes (23 total touchdowns, 613 rushing yards), but the defense from last year remains mostly intact to complete redemption.

Dundalk: The Owls are the top seed in the 3A North and beat last year’s runner-up in 3A, Milford Mill, 28-7 just two weeks ago.

Blake: The Bengals have just a 2 percent chance of beating Linganore, according to Massey Ratings, and only two other teams have worse odds. While the Lancers are the reigning state champions, Blake should get a larger — not the largest — piece of the pie. They have the line to match up and athletes to bust a big play, as well as proof they can, in fact, pull off a huge upset. Earlier in the season they hung with defending 2A champion Damascus and gave Linganore fits in the playoffs last year. Be wary of these Bengals.

Edgewood: There isn’t a better four-seed out there with better chances to make noise than Edgewood. They have a 48 percent chance to beat top seed Dundalk this week and 14 percent odds to win the 3A North. Their line is relatively big and they field one of the most dynamic athletes in the state in Maryland commit Deonte Banks.

3A teams on upset alert

Dundalk: The Owls have the top seed in the 3A North, but are just 52 percent favorites against Edgewood this week.

Linganore: The Lancers are the reigning state champions and are favorites once again but have work to do. They welcome Blake this week, a team that gave them some trouble in this game last year and hung with defending 2A champion Damascus earlier in the season. 98 percent favorites or not, Linganore will need to play solid if they want to live for another week.

Damascus: With the nation’s longest win streak (52 games), the classification’s top seed, an unblemished home record the past five years and the country’s top recruit, the Swarmin’ Hornets should be considered as the team to beat. Though they lost three college-level linemen to graduation, the offensive front remains convincing with 5-star recruit Bryan Bresee, Ryan Linthicum (offer from Michigan) and four-year varsity player Elijah Baisden. T.D. Ayo-Durojaiye is a home-run playmaker and Division I safety, and this coaching staff knows how to win even though the computer has them at 11 percent odds to capture a fourth straight title.

Oakdale: The Bears have ascended into the title conversation over the past four years but have just one playoff win over that span to show for. However, two of those playoff losses came to the eventual state champion and the other to a top-five ranked team in the state. Now, with its best shot to finally win the big one, can it come together? Division I recruits Collin Schlee and Simeon Sabvute lead a potent offense at quarterback and running back, and on defense, Division I recruit Maurio Goings mans a first-team defense that’s allowed just one touchdown all season. The computer says there’s a 42 percent chance they breakthrough and finally win it all. One not-so-small thing stands in the way, though: Damascus.

Glenelg: The Gladiators should coast to the 2A title game, since the computer has them at 86 percent odds to play at Navy on Dec. 1. They would be underdogs against Damascus or Oakdale, but with Wande Owens — the most decorated running back in Howard County history — Glenelg has a shot.

Liberty: The Lions are 10-0 but are heavy underdogs at home versus Oakdale. That motivation could very well lead to a spirited upset and spark a special run behind quarterback Nate Kent.

North Caroline: The Bulldogs have an 87 percent chance to win the 2A East and have yet to lose this season.

2A teams on upset alert

Oakdale: Not saying it’s going to happen, as the Bears are three-score favorites to win, but Liberty knows how to win (Lions are 10-0) and a home game in the rain could make it interesting.

Dunbar: The Poets are 61 percent favorites to go back-to-back by Massey Ratings and not much stands in their way from doing so, other than Fort Hill.

Fort Hill: The Sentinels are geared for their sixth straight title game appearance behind their smashmouth approach.

Next — Players to watch