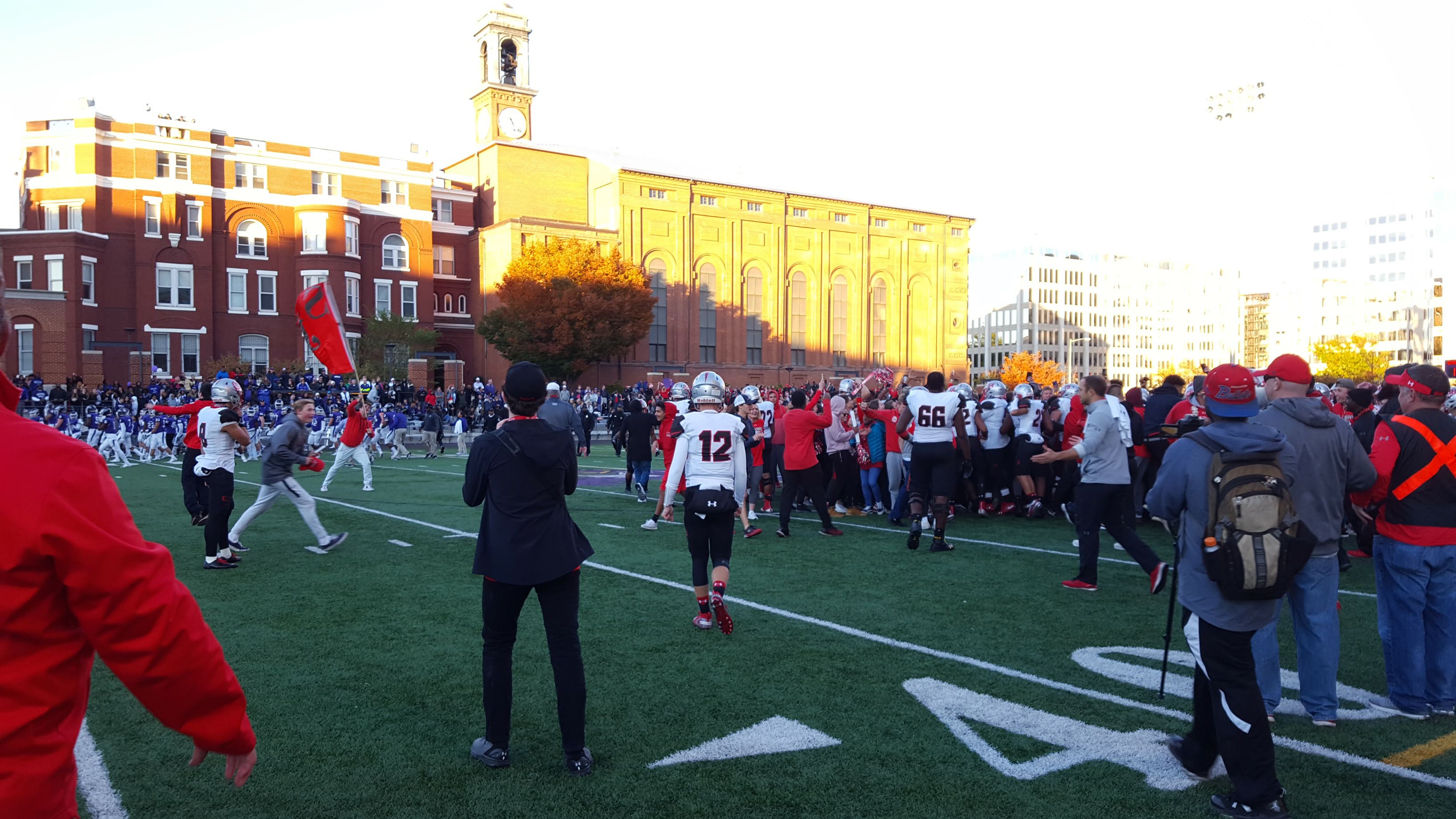 WASHINGTON — Like a sudden rush, the emotions at hand and those tied to family sacrifices swept over St. John’s quarterback Sol-Jay Maiava. After heaving a 66-yard touchdown to Cam Ross to effectively seal what would be a 34-17 win over rival Gonzaga, the junior quarterback slowly paced back to the sideline in tears.

Few knew what exactly was going with Maiava, as coaches and players attended to their leader. Over the summer, Maiava moved from his native Laie, Hawaii to the Washington area with his family to enhance prospects as a college football recruit. The 4,800-mile sacrifice, as well as securing an undefeated regular season after momentum had teetered, overwhelmed the Cadets signal-caller.

“I was just thinking about all the sacrifices that I had made and what my family had made,” Maiava said. “I was just thankful.”

Maiava ended the regular season finale 9-for-18 with 172 yards and two touchdowns through the air. He also rushed for 34 yards and a score on nine attempts. St. John’s, which finishes 9-0 overall and 4-0 in Washington Catholic Athletic Conference play, will now host Gonzaga (7-3, 1-3) next week in the WCAC semifinals. The Cadets also defeated the Eagles in last year’s conference title game, 30-7, in College Park. The winner will play either DeMatha or Good Counsel for this year’s title on Saturday, Nov. 17, at the University of Maryland.

With a rematch around the corner, something that was already set in stone before Saturday’s matinee, who knows how much of the playbook coaches used. On the field, St. John’s hammered down from the onset and despite a few hiccups in the second half held on for a three-score win.

In their first five plays from scrimmage, the Cadets had compiled 94 yards and two touchdowns for a 13-0 lead midway through the opening quarter. Both of those drives started inside plus territory — at the 46 and 48 — thanks to two quick three-and-outs forced by the havoc-wreaking St. John’s defense. Ronald Cook (game-high 62 yards rushing on 12 carries) got the scoring started on a 37-yard run up the gut, a play he went untouched, and Maiava followed it with a 46-yard pass and score to Michigan commit Quinten Johnson.

Maiava added a short scoring run four minutes before the half and Cook piled another touchdown, this time from nine yards, to swell the St. John’s lead to 27-3 at halftime. Gonzaga’s Marco Kemp converted a 38-yard field goal, but the Eagles struggled on third down (1-for-8) while the Cadets excelled (4-for-6 with three scores).

@SJCGridiron keeps the throttle down, scoring with 1:20 left in the half to make it 27-3. Ronald Cook from nine yards. Huge for the Cadets. Grimacing for the hosts. https://t.co/4kp0YSFsKw

Things got interesting in the early minutes of the second half. Gonzaga made it 27-10 on a 16-yard run by Malcolm Terry II and then got the ball back in the red zone when Maiava fumbled it on the ensuing drive. The Eagles fumbled that opportunity away as well but brought it to 27-17 with 11 minutes left in regulation when sophomore quarterback Caleb Williams (11-for-24, 154 yards; sacked four times) found John Marshall for a 20-yard score.

With emotions swirling, Maiava then delivered the dagger with the long touchdown pass to Ross, putting the Cadets ahead by three scores as the minutes trickled away.