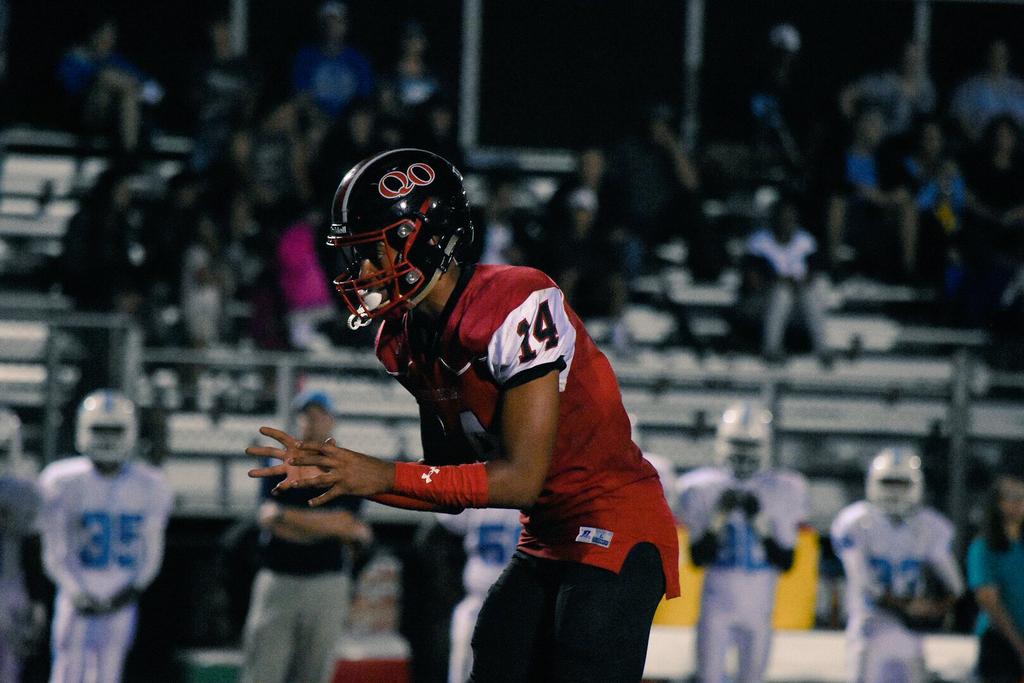 GAITHERSBURG — Brian Plummer took the snap from the gun, shuffled back a step and, like he’s focused on throughout this time of transition and learning, only worried about his progression, knowing the rest will take care of itself.

For the first time in four years, Doc Bonner won’t be commanding the Quince Orchard offense, heroically and emphatically leading the Cougars to victory. That’s just the cycle of high school sports, and with Bonner now at Air Force after keying two straight Class 4A state title appearances, Plummer, a sophomore, inherits the most coveted on-field position on a team more than eager to finally win it all.

At 6-foot-3 with dual-threat capability, Plummer has the skillset to become one of the best quarterbacks in the state at some point, but he isn’t asked to play like Bonner, who also was thrown into the fire as a sophomore in 2015. Plummer’s role is the bowtie to an offense that’s already strong-suited with a plethora of weapons and an imposing line paving the way. That 1st-and-10 pass from just outside the red zone found the outstretched arms of experienced receiver Brendan McGonagle, who split the defense on a slant route and glided 23 yards into the end zone, triggering the first of many touchdowns in No. 7 Quince Orchard’s 55-14 romp over Clarksburg on Thursday night at the Cougar Dome.

Plummer’s first pass gave Quince Orchard (3-0) a 7-0 lead three minutes into regulation and his second made it 14-0 just two minutes later: a well-placed wheel route in the flat to Sherwood transfer Chris Webb, who then zipped 46 yards for the score. But the Cougars didn’t need to ride the quarterback to get in scoring position. Running back Marquez Cooper exploited holes for 163 yards and three touchdowns on nine carries and went for gains of 32 and 14 to setup Plummer’s two passing touchdowns.

The sophomore finished 4-for-8 with 76 yards and those pair of touchdowns through the air. He also threw an interception when he tried forcing something up the sideline, but it came when it was all but over.

“I thought he made some good throws tonight. He threw a pick, but that’s what happens; that’s apart of being a sophomore,” Quince Orchard coach John Kelley said. “He threw good balls. Again it’s a learning process for him. He’s a young quarterback. You have to try to bring him along. You have to get better every week. You can’t stay the same.”

On the Cougars’ third drive of the night, Cooper ripped off a 50-yard gain and followed it with a 12-yard score up the gut to make it 21-0. On the fourth drive, after the fourth straight three-and-out (Clarksburg’s only first down to that point was off a Quince Orchard penalty), a pass that would’ve gone for double-digit yards was dropped by Webb and a 60-yard deep shot intended for McGonagle was a smidge overthrown, but the Cougars continued to dominate the ground. Cooper ran in his second touchdown, this one from seven yards out, to make it 28-0 after one quarter. His third came on a 32-yard scamper that put things out of control at 48-0 right before halftime.

Quince Orchard finished with well over 200 yards rushing and may have eclipsed 300 on Thursday night, effectively proving its new-look offense is geared for another title run this fall. Over the past three years, they’ve built around Bonner, the quarterback. Now schemes are molded around power football and the many weapons at their disposal, allowing Plummer to adapt comfortably and not having to shoulder a burdening load.

“I feel like [Coach Kelley is] giving me the right amount of stuff, making me successful,” Plummer said. “We have great receivers, great weapons. I’m just focused on making the right reads.”

Jeremiah White added a rushing score and Steven Williams recovered a shanked Clarksburg in the end zone for a touchdown to make it 35-0 and 42-0 in an almost-flawless second quarter. If you really want to nitpick, Clarksburg’s Drew Moore returned an 85-yard kickoff return for a touchdown on Quince Orchard’s starters a minute before the first half ended.

Outside of that one breakdown, the Cougars held Clarksburg to 39 yards on 20 plays in the first half and executed nicely on a muddy playing surface saturated from the steady rain over the past week. Now, their focus turns to Bullis, a battle between two top 10 programs in the state next Friday night.

“[The 3-0 start has] been good,” Kelley said. “But the field conditions, there’s a lot of stuff we really couldn’t do. We just tried to run the ball downhill. But for the most part, I like our offensive line. I like our running backs. Quarterbacks are coming along. Our defense is playing well. … It’s all about getting better from here.”