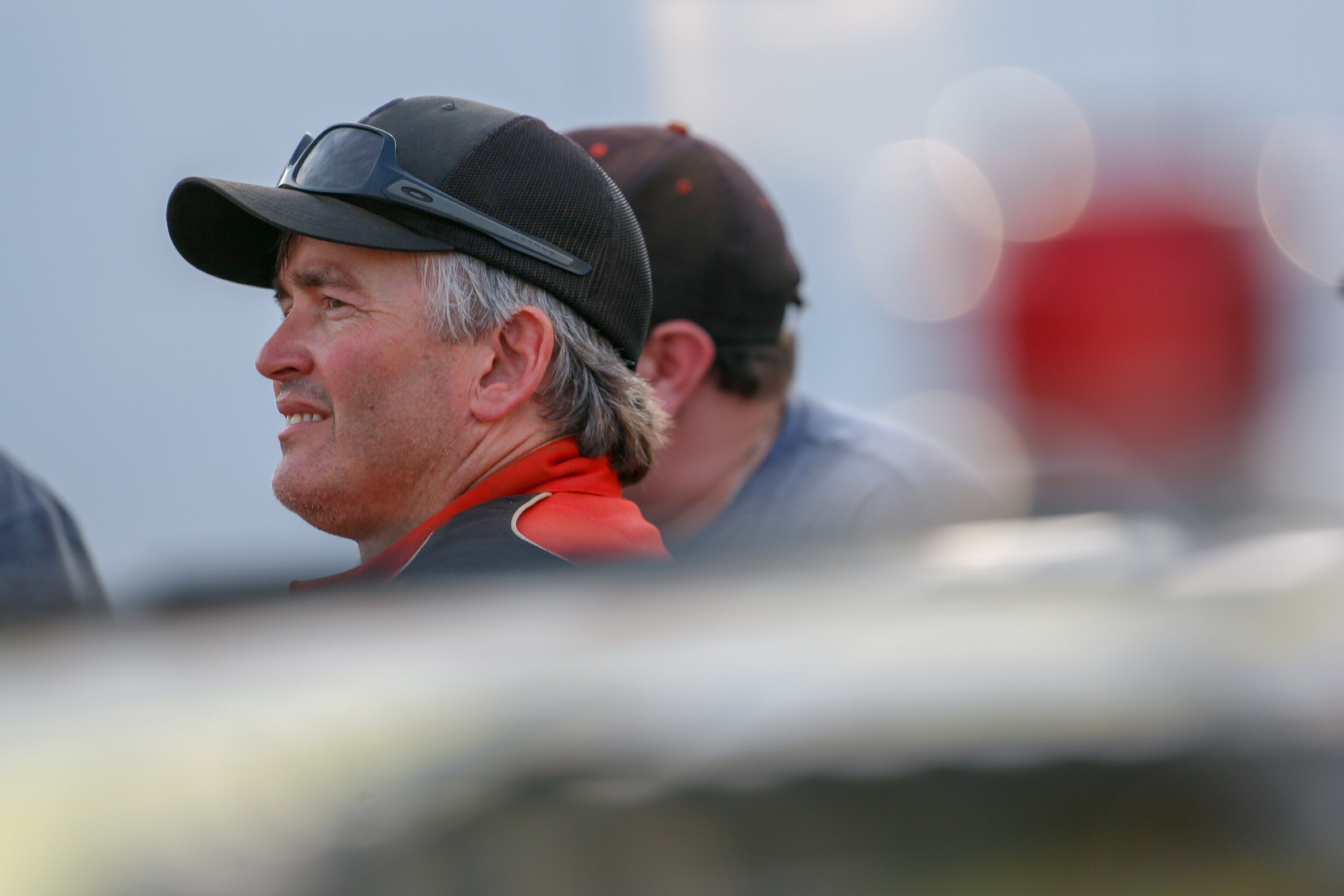 Jason Covert, shown at the Northeast Ultimate Super Late Model Series race on May 26, 2018, at Port Royal Speedway, is one of the many drivers to watch in Saturday’s Lucas Oil Late Model Dirt Series Stanley Schetrompf Classic at Hagerstown Speedway. Photo by Kyle McFadden.

Tire rule: Left rear/fronts – Hoosier Rib 28.5 1300 … Right rear – Hoosier 01, 04 … must use the same set of four tires for time trials, heat races, and B-Main … competitors may use three new tires for the A-Main … cutting or siping of any tire is allowed

If there was an Official World Late Model Ranking like in golf and tennis, Davenport would easily be at the top. After all, his nickname is “Superman.” He’s the reigning LOLMDS champion and he’s already working on another title. Through 12 races this year the Georgia native has four wins and eight podium finishes, good enough for the early points lead. Davenport swept the weekend last year and should be the favorite Saturday night.

In his first full season with the LOLMDS, the 22-year-old has established himself as one of the best young talents in all of Late Model racing. He has three wins and seven podium finishes through 12 races in 2019, marks that trail only Jonathan “Superman” Davenport.”

“Rocket Man” isn’t fully acclimated with his new home, Clint Bowyer Racing, but the 2017 LOLMDS champion enters Saturday with momentum and plenty of experience at the Hub City oval. Richards was the quick-time recipient Thursday at Atomic Speedway, so if he can translate that kind of speed to the place he’s won at seven times, it could very well lead to his first LOLMDS win of 2019.

The Illinois native isn’t a LOLMDS regular but since the World of Outlaws is off this week the WoO points leader will add spice to an already loaded field. Sheppard has six WoO wins in eight races, and in seven LOLMDS events, he has yet to finish worse than sixth to go along with one victory. Sheppard will be tough pass on Saturday night.

Even though T-Mac has just two top sixes in 12 LOLMDS races, the former NASCAR driver is seemingly always in the mix at Hagerstown. He finished fourth in last year’s Stanley Schetrompf Classic.

After a long, loyal run on the World of Outlaws tour, the York, Pa., native and Hall of Famer is back to a regional schedule in 2019. “Scrub” is 14th all-time in SLM wins at Hagerstown Speedway with 27, the last coming in May 2017.

After a two-year push on the LOLMDS, Satterlee returns to a regional schedule in 2019. He’s the 2016 winner of the Stanley Schetrompf Classic winner.

Covert’s last three LOLMDS features haven’t gone smoothly (22nd, DNF; 12th; 27th, DNF), but the York Haven, Pa., native enters Saturday with many reasons to be confident. He’s won two of his last seven features, one of them being at Hagerstown last October, and he’s been fast everywhere he’s went. Couple that with his knowhow and experience, and it could translate into his second-ever LOLMDS win.

Tyler Bare, the 23-year-old son of renowned Late Model racer Booper Bare, put himself on the map when he finished third in last year’s Stanley Schetrompf Classic. The Southern Virginia native went on to win four times across the Mid-Atlantic last year, including the $20,000-to-win USA 100 at Virginia Motor Speedway. Bare has the equipment and talent to overtake a loaded field Saturday night.

Last year, “General Lee” started on the outside of the front row but emotions and the series’ quirky tire rule got the best of the 20-year-old. The Greencastle, Pa., native, behind former national touring crew chief Matthew Barnes, has only learned since. Two weeks ago he snapped a year-and-a-half-long winless streak and the last time he raced at Hagerstown he finished second.

Other locals to watch

No. 36 Kyle Hardy — After racing regionally for years, the 25-year-old is now racing full-time with the World of Outlaws. An off-week brings him back to his stomping ground, where he won once in 2018

No. 72 Justin Weaver — has a guaranteed starting position after winning the Northeast Ultimate opener at Hagerstown in March

No. 20 Trever Feathers — the third-generation racer is currently mangled in a year-long winless spell and he’s rolling out untested equipment on Saturday, but when he’s on, he’s on

No. 11 Austin Hubbard — fourth-place finish in a LOLMDS show this year

No. 72 Michael Norris — The Sarver, Pa., native isn’t confirmed for Saturday, but he has 11 wins his last 21 features across the Mid-Atlantic

No. 44 Gary Stuhler — all-time leader in wins at Hagerstown Speedway