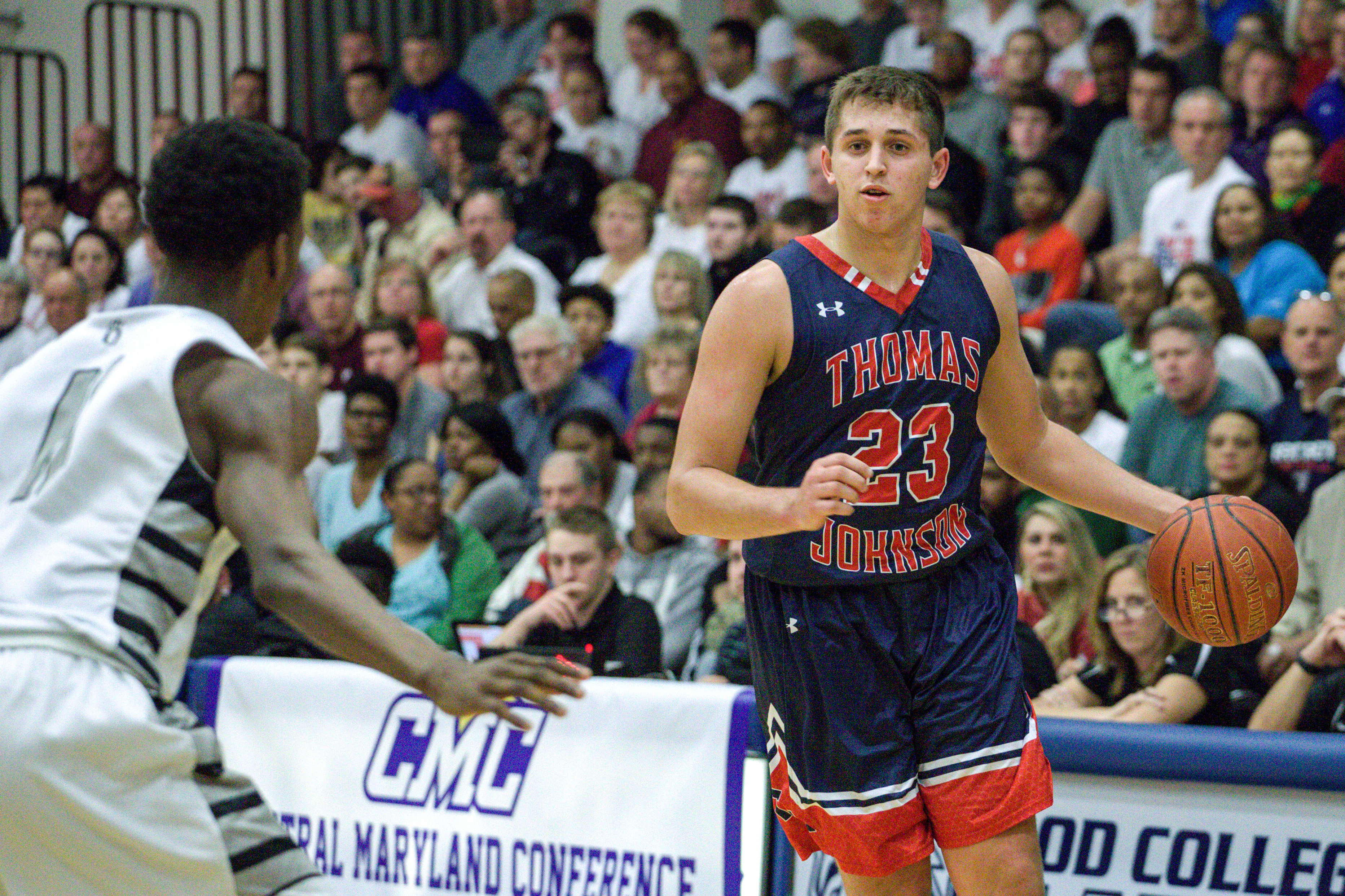 The eighth installment in a series of the 16 region-winning Maryland Public Secondary Schools Athletic Association boys’ basketball teams ahead of this week’s state tournament at the Xfinity Center.

As soon as you walk into Thomas Johnson’s gymnasium, you’ll notice blue, double-decker bleachers in a hollow arena and the weight room on the upper level, not too far on the right. But if you peel left, where the athletic offices hang over the gym, school records and accomplishments on red and blue posters are taped to the doors and walls, offering a glimpse at the boys’ basketball program’s rich history.

When Patriots’ coach John Manley took over the program in 2008 after serving as an assistant since 2002 — the back-end of 12 Final Four appearances and five state titles in 20 years — one of the first things he did was compile accolades from the glory days and display them for the Thomas Johnson body to behold.

“I felt like that was important,” Manley said. “When alums did come in, they got to see their name up there. And it’s important for our kids to see that; to see that history.”

At that point, Thomas Johnson hadn’t reached a Final Four in six years, the longest drought since that storied run began in 1975. Nine years later, and the Patriots are finally dancing once again. On Saturday, Thomas Johnson defeated Rockville for the 3A West title, 64-51, to advance to the semifinals against Baltimore County’s Milford Mill on Thursday at 3 p.m. at University of Maryland’s Xfinity Center.

“For me right now, I told them this weekend after our game, I said now it’s your turn and now it’s your cycle to re-make history for this school,” Manley said. “They’ve just embraced it.”

At the core, through the bumps and tribulations, this is a 16-year project in the making for Manley. He’s the only coach in the state tournament’s 16-team field with a losing record, which should portray this feat hasn’t come easily. He’s tirelessly studied the rich history of TJ basketball. He’s kept alumni plugged into the program. He remains in close contact with legendary coach Tom Dickman, the architect of those seven state titles, soaking in every tidbit like a sponge.

“It’s very special,” Manley said. “It’s been a great year. Period. This just made it even sweeter. I’ve had alumni I’ve been in contact with come back. … You play for those who came before you, because of the history of TJ. But you also play for those who have yet to come. We’ve had more of our middle school kids sitting in our stands. That’s the impact [we] have on them.”

The buzz around Thomas Johnson basketball has returned. After starting the year 2-2, getting routed by No. 7 Oakdale on the road, 75-60, and an upset loss to Watkins Mill, 56-45, these Patriots have won 21 of 22, with the only loss to Oakdale in the Central Maryland Conference title game at Hood College. But really, after the loss to Watkins Mill, the team direction shifted north, a spark that ignited an 18-game winning streak.

“We got away from what was working for us,” Manley said of the loss to Watkins Mill. “When we went into the locker room after that game, we told them that ‘you’re messing with the basketball Gods, fellas.’ Karma can come back and bite you in the butt. Right after that game, we got back to work that week and we went on a streak.”

Thomas Johnson is led by Braxton Foreman (14.5 points on 48 percent shooting, 5.9 rebounds, 2.0 assists, 2.3 steals per game), a versatile 6-5 wing who can get out in transition and space the floor with an outside shooting stroke (38 percent from 3-point-land).

“These kids are really resilient,” Manley said. “They just have this attitude that you’re not gonna beat us.”

Manley believes an advantage his team will have Thursday evening is the adaptation to the large, open arena and the handling of an altered depth perception. The Patriots play in a gym similar to the Xfinity Center, in terms of shooting on portable baskets rather than ones that hang from the ceiling.

When asked how he’s preparing his players this week, Manley said, “It’s not just another game. But at the same time, we need to stick what’s gotten us this far, which is getting to the basket, sharing the ball, rebounding and getting to the foul line.”

A win against Milford Mill on Thursday, which is no small feat, will more than likely set up a meeting with powerhouse No. 1 Poly, which boasts a starting five of Division I recruits. The Engineers also won it all last year and took Simeon (Chicago), the eighth-ranked team nationally, down to the buzzer this year.

“It’s going to take a lot,” Manley said. “I think we match up well with [Milford Mill]. … If we rebound really well, box-out and go, again, a big court for them, too, to play on, and spacing, I think it can be a really good game. I think it can be a close game. .. If we get to Poly, that’s a giant hill to climb. I think our kids will be ready. … It’s been incredible.”