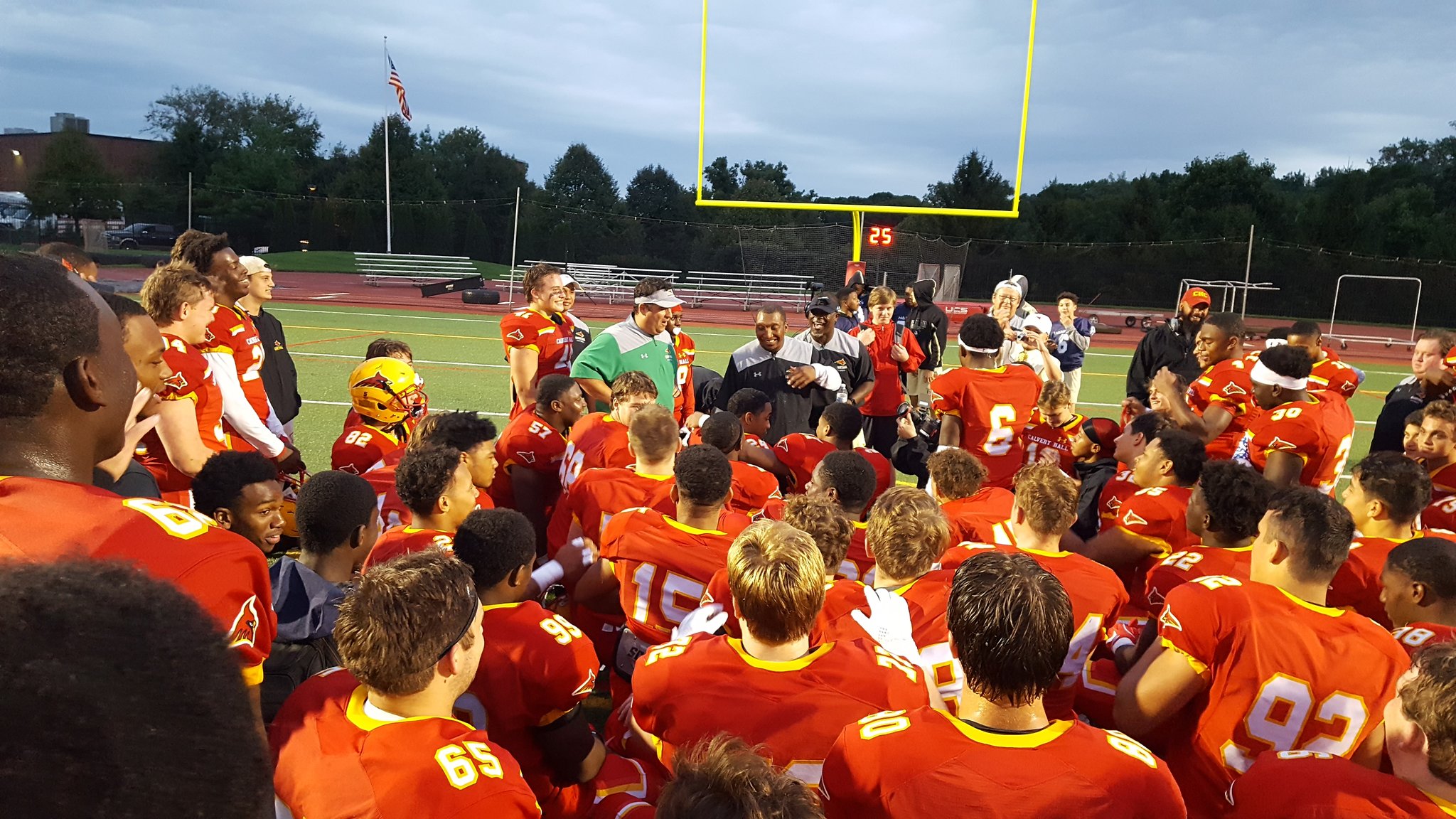 TOWSON — Through all the twists and turns, the swings of elation and the grumbles of displeasure, the no calls and the bad calls, the steady rain and the pleasant evening, one play defined it all.

Wise quarterback Quinton Williams stood in the gun, using his arm and dynamic receiver Isaiah Hazel, a West Virginia commit, to get in this position: 10 yards from erasing a five-point deficit with mere seconds to go, with the weight of a 43-game win streak on the line. On the other side, Calvert Hall dug in, not bracing but readying.

The snap came, the constant scoring threat, like it has throughout this flawless four-year stretch, was in the flat, but on this day the Cardinals defense reigned supreme. While the defensive line penetrated, linebacker Mike Johnson barreled through the line of scrimmage, untouched, and wrestled down Williams before he could even complete his reads. The clock hit zeros and Cardinal players and coaches streamed the field.

No. 20 Calvert Hall had just foiled No. 4 Wise, 19-14, and one of the nation’s longest win streaks. On a day its defensive line dominated, it was only fitting the Cardinals ninth and final sack sealed the deal.

“I don’t even know what I’m feeling right now, to be honest. I’m overwhelmed. I really am,” said Calvert Hall coach Donald Davis after he addressed his team with emotion and jubilation. “I’m just overwhelmed. Man, I feel great. … Oh, man, that’s big. To beat a team of that magnitude, that’s been winning for that long. They have kids on their team that have never lost a high school football game. That’s amazing. For our kids to gut it out, it’s tremendous.”

Up until Saturday, Wise hadn’t lost a game since Nov. 15, 2014, when DuVal beat the Pumas in a first-round playoff game, 20-14. Since then, they’ve reeled off three straight 14-0, MPSSAA 4A state title seasons and built the second-longest active win streak in the country at 43 games before the Calvert Hall defense stoned Wise’s traditionally dominant front (27 yards on 32 carries).

Calvert Hall's d-line has come to play. Wise has a mere 2 yards on 22 carries and for the fifth time the Cards sack Pumas QB Quinton Williams. pic.twitter.com/zhEXZAIUrr

‘Those guys are tremendous,” Davis said of his front-seven. “You have Billy Wooden and Keenan Sumler inside. Anthony Anderson and Nick Lenon on the edge. And then Keith Powers coming off the bench. … They’re the best defensive line I’ve ever coached collectively, as a full unit. They’re the best.”

Calvert Hall running back Sean Tucker finished the day with 121 yards and two touchdowns on 22 carries, with most of his damage coming in the second half. In the first 24 minutes, Tucker only mustered 10 yards on 10 carries with his longest rush being 13 yards. It didn’t take long for him to heat up in the second, a half he totaled 111 yards on 12 carries and attributes to an answered prayer.

“[At halftime] I was saying, ‘God, give me the strength and speed and the quickness and the smartness to do what I got to do,’ ” Tucker said. “And it came.”

On Calvert Hall’s second series of the new half, Tucker stiff-armed his way past multiple defenders en route for a 30-yard score that put the Cardinals ahead, 13-7, with three minutes left in the third quarter. It was also their first touchdown of the night. Peter Moore made field goals of 27 and 20 yards in the first half, which Wise led 7-6.

Tucker’s second touchdown proved to be the deciding score, when he capped a nine-play, 74-yard drive on a goal-line plunge with less than three minutes to go, making it 19-14.

Despite a fierce front-seven and a dialed-up ground attack, Wise never backed down. After Calvert Hall went up 13-7, the Pumas answered on their very next drive. Facing a 4th-and-long, Williams (13 of 20 for 237 yards) flung a 36-yard gain to sophomore Jalil Farooq (89 yards on three receptions) from the Cardinals 42-yard line to the 6. Two plays later, Brandon Bell punched in his second score of the contest, putting Wise ahead once more, 14-13, in the final seconds of the third quarter.

HUGE sequence for @WisePumaSports. Quinton Williams connects with sophomore Jalil Farooq on 4th and long to get to the 6, then two plays later, Brandon Bell plunges across for the go-ahead score. It's 14-13 Pumas at the end of the third. pic.twitter.com/mN3NN7pRDi

Then after Calvert Hall regained control, Wise marched from its own 20 to the Cardinals 10 in under two minutes — highlighted by a 38-yard Williams screen pass to Hazel, who bolted from the 48 to the 10 with 26 seconds left in regulation, where the Pumas burned their last time out.

Last year, the Cardinals were stymied and felt robbed of a 15-13 loss at Wise, which would have snapped the Pumas’ 30-game win streak 365 days earlier. They circled their calendars for this very moment, and when it came, they got what they sought: Williams incompletion on first down. 18 seconds left. Williams incompletion on second down. Eight seconds left. Williams sacked by Johnson. The streak over.

“It hurt. It hurt everybody on the team,” Johnson said of last year’s loss. “We were like, ‘They’re gonna come into our house [next year] and we’re gonna snap that streak.

“We knew we was gonna do it. It wasn’t a question. We were gonna come in and play aggressively, end that streak. And it happened.”