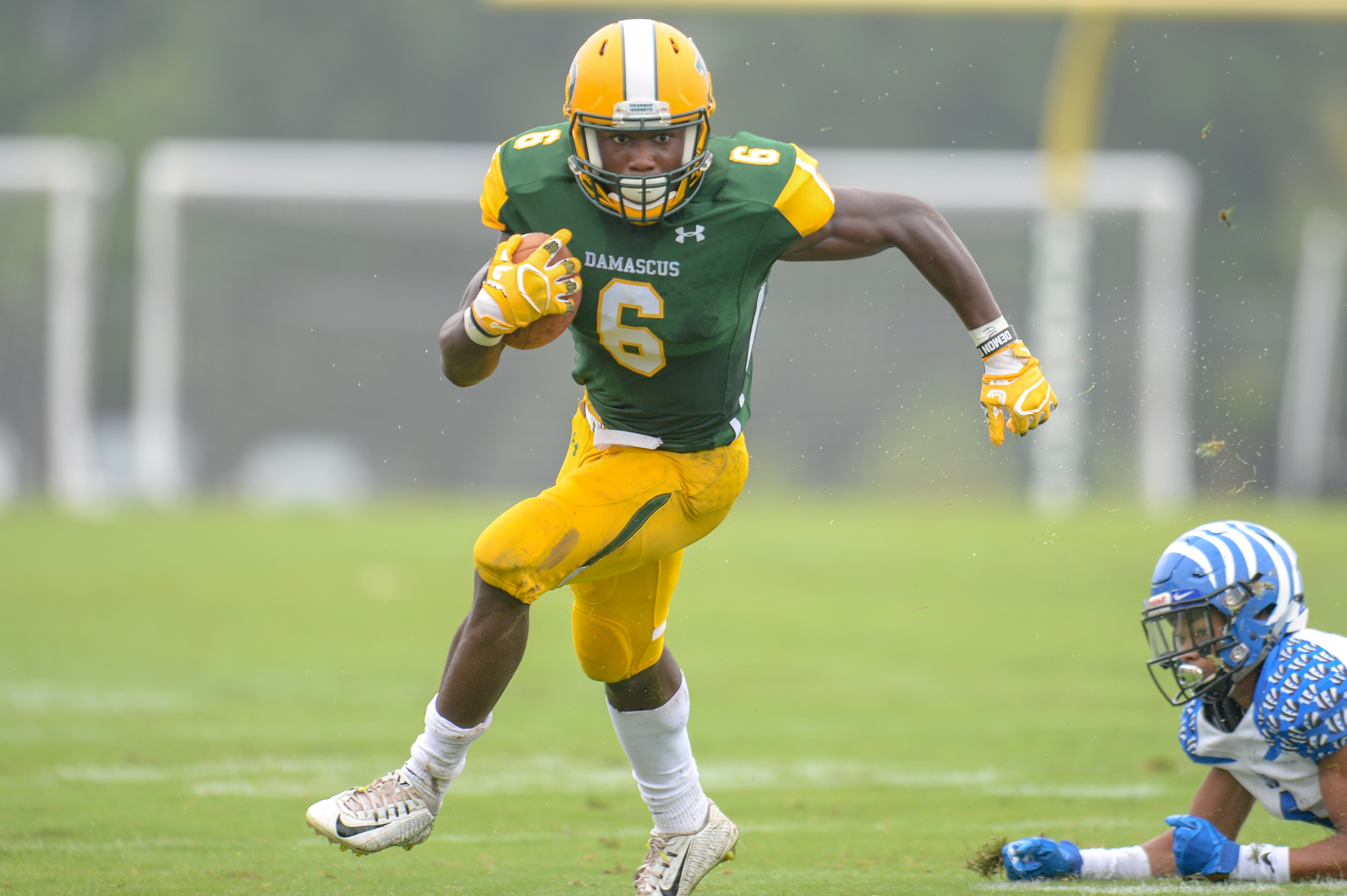 DAMASCUS — After the post-game handshake line, when Damascus collected win No. 43 in a row to keep the nationally-recognized streak alive, Eric Wallich wiped his hand across his face as players took a knee around him.

Most teams would be thrilled to start a season 1-0, especially one that keeps a distinguished stretch going for another week, but for Wallich, the coach of this Damascus football with an always-high standard, Saturday morning’s 28-12 win over visiting Blake evoked more frustration than pats on the back.

“If we’re going to play a certain way and retaliate, we need to play a lot tougher mentally. A lot tougher,” Wallich bluntly told his team.

The Damascus expectation is one of the weightiest of weights a high school football player has to manage. Every season is practically championship or bust and when flaws leak they’re exposed and picked on, even after a 16-point win against a playoff team like Blake. And Wallich didn’t mince words in his assessment of this year’s group trying to add on what is already three straight state titles and break the Maryland all-time winning-streak at 50 games.

“We’re terrible right now. We have no mental toughness,” Wallich told me. “We’re not mentally strong right now. I don’t see very much positive. … Yeah, it is [surprising]. It’s the first game. We’re a young team. But we have a ways to go if we’re gonna be able to make any noise this season.”

Like many high school football games across the state, Friday night contests were postponed to Saturday because of lightning, and Blake-Damascus was one of them — halting at 7:31 p.m. Friday and resuming at 10 a.m. on Saturday with the Hornets leading 14-6 after two quarters. Technically, the half lasted 14 and a half hours, and during that time players were encouraged to get off their feet, hydrate, rest and maybe watch some film, which is what the coaches did for most of the night.

“It’s definitely different,” said Damascus RB/DB TD Ayo-Durojaiye, who gave the Hornets leads of 7-0 and 14-6 with touchdowns on the ground and through the air. He also ran for 46 yards on six carries in the second half.

“We can’t be happy with today,” Ayo-Durojaiye added. “Yeah, we won 28-12, and our defense was pretty good, but we had too many mistakes; a lot of big plays given up. A lot of just not doing what we’re accustomed to doing. We just have to come out in practice, be more intense and just be better. This wasn’t our best game.”

In the first half, Damascus strung together two long scoring drives — one of them a 52-yard hook-up from QB Michael O’Neil to Ayo-Durojaiye — but went 3-and-out three times. The Hornets showed that same streakiness from the onset of the second half, forcing a Blake 3-and-out on its opening possession and then showing some urgency to take control on a 7-play, 54-yard scoring drive. The score pushed Damascus’ lead to 21-6, a series that was capped by an eight-yard Aiden Beall score and featured two productive O’Neil completions, an O’Neil 11-yard keeper, and a nifty 24-yard gain down the right sideline by Ayo-Durojaiye that put the Hornets at the 6.

But Blake answered with a 6-play, 67-yard drive highlighted by a 36-yard completion from Patrick Musaro Jr. on 3rd-and-15 that set up the backup QB’s 1-yard score to cut the deficit to 21-12 with 5:20 left in the third quarter.

From there, Damascus punted twice; Bryan Bresee, the nation’s No. 1 recruit in the Class of 2020, produced a drive-halting sack; and Ayo-Durojaiye came up with a timely interception to thwart a Blake comeback bid.

O’Neil (6 of 9 for 33 yards and a TD in the second half) then tacked on the put-away score when he found James Petrolle in stride 32 yards down the right sideline with five minutes to go.

This year, the Hornets are trying to fill voids left behind by the Class of 2018, many of them who played large rolls for all three state titles in 2015, 2016 and 2017 — namely linemen Michael Jurgens (Wake Forest), Jordan Funk (Army) and Matt Betterelli (Shepherd-Division II) and two-time state champion quarterback John Allan-Furgeson. The frontline talent, like Bresee and Ayo-Durojaiye, is still in place to make another dominant run to Navy — “The well isn’t totally dry,” Wallich said — but at the moment the pieces appear scattered across the table.

“This team just needs to stay together,” Ayo-Durojaiye said. “It’s not going to take one person. It’s not going to come from me or Bryan, or the offensive line. The whole team has to stay on the same page. We have to do it together. If the front seven is right but the secondary isn’t, that’s how big plays happen, and vice versa. We just have to be together, come together. And it starts at practice.”

It’s also worth noting this Damascus team likely has its smallest senior class in program history (nine) and its roster size in the upper 30s is already taking a toll on its depth — “We’re beat up. We’re beat up. That’s a big part of it. We have a crazy amount of injuries. It’s showing,” Wallich said.

Even through the cloudiness, Wallich still believes this version of Damascus can mold into the physically-imposing, state-title bound unit that’s reigned the gridiron for the past three years. It’s just a matter of it coming to fruition.

“I think they can. I think when these young kids grow up a little bit, I think we can be pretty dangerous if we play our brand of football,” Wallich said. “But we’re not there right now.”