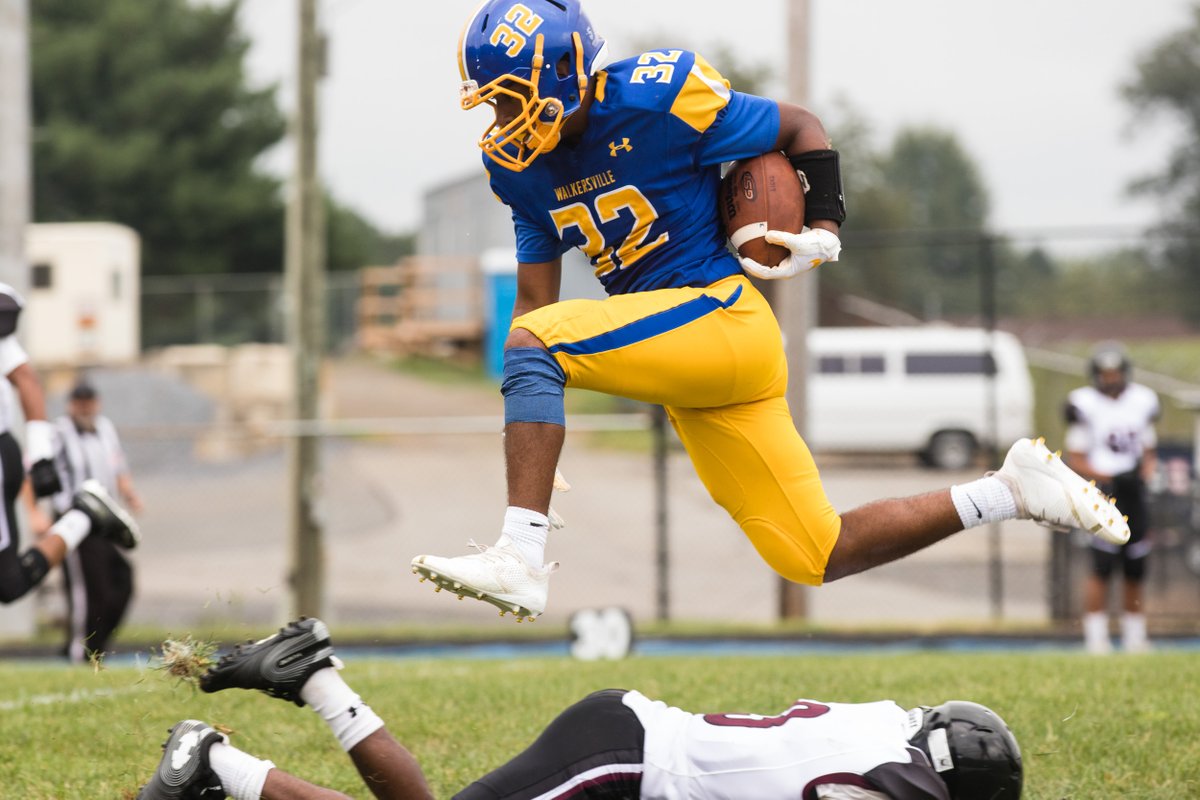 Walkersville RB Isaiah Daniel leaps over a New Era defender en route to his 56-yard TD run in the first half of Saturday afternoon’s opener. Photo by Duncan Slade.

WALKERSVILLE — For the 17th time in a row, Walkersville football celebrated to the tune of John Denver’s “Take Me Home, Country Roads,” another home win in the books for a streak that dates back to 2015. But for many, Saturday afternoon’s 46-0 victory over New Era provided a first significant taste of varsity exultation.

The Lions recently graduated the most accomplished class in program history, a group of 24 that totaled 36 wins, two region titles and a state championship from 2015-17. So, Saturday’s opener featured a host of unproven faces debuting new roles for this fresh football chapter in Walkersville. While the names have yet to leave their mark, the on-field product remained relatively the same: A productive ground attack with a pressure-packed defense.

“I thought we played well,” Walkersville coach Joe Polce said. “We got off to a fast start [Friday] night and then we hit a lull. And then the lightning came and we met with the kids this morning, and I thought we played really, really well in the second and third quarters today. So, I’m proud of them.”

“Everyone came out to play,” Walkersville senior DE/RB Alonso Hoes said. “All of the young guys saw what a real varsity game looks like. We’re hoping each week we can build up for each one. Definitely a great team win.”

After a Jake Hess interception, junior RB Isaiah Daniel (101 yards on seven carries in the final three quarters) ripped off a 56-yard touchdown to keep the party rolling and push the Lions’ lead to 25-0. Daniel added his second shortly after, Nick Edwards found paydirt from eight yards away and Nate Wolf cleaned up the scoring with an eight-yard run of his own for leads of 32-0, 39-0 and 46-0.

“I think we executed well,” Hoes said. “Just our line, some missed blocks and they came in and stuffed us up. But we’ll tighten it up.”

Walkersville is employing an entirely new line this fall, which consists of mostly sophomores and juniors trying to get acclimated to the varsity level.

As for the defense, Walkersville held New Era to just one first down over the final three quarters. The Lions, though playing against a much inferior opponent, also maintained a high level of pursuit and physicality that highlighted the hallmark defense over the past three years.

“I liked the intensity,” Hoes said. “I liked how everyone was willing to jump in, get their shot, prove to the coaches, prove to the community that we are the next team.”

After last year’s roster of 42 consisted of 24 seniors, this year’s group of 44 has 10 sophomores. It’s the most since 2015, when Walkersville surprised the state with an unexpected trip to the Class 2A title game.

Polce isn’t one to get ahead of himself or lay unfair expectations over a group, and while it’s too early to tell what this team is capable of, we do know one thing: “I think you’re going to see us improve each and every week,” he said. “We’re a very young team. Everything is a learning experience. I think they’re giving us maximum effort and I think we’re going to improve every week.”