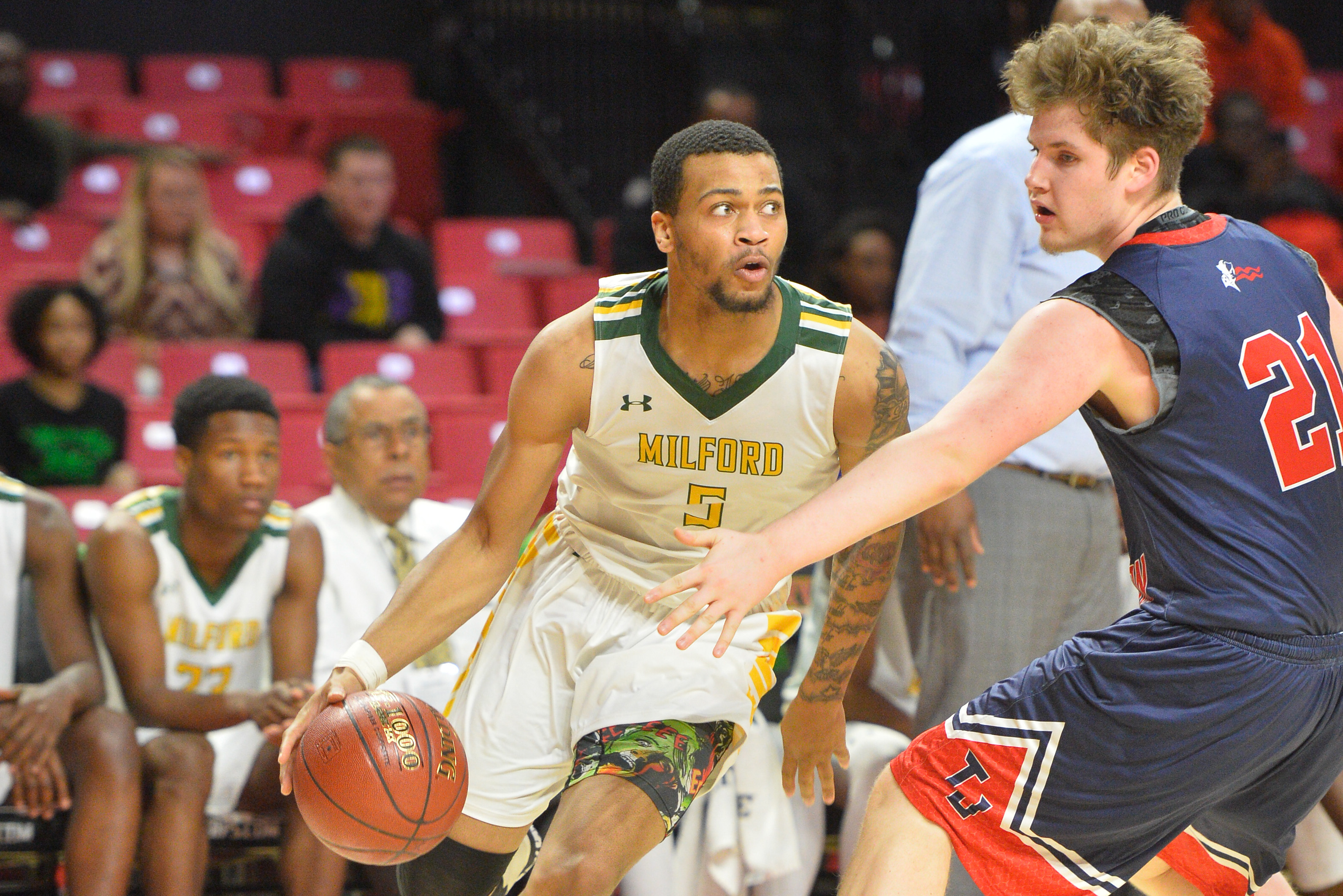 COLLEGE PARK — Eric Turner got the ball in the high post and backed his defender down, plowing his built 6-foot-5 frame into the chest of Thomas Johnson’s Braxton Foreman, who looked helpless as he succumbed toward the hoop. Turner then swiveled to a face-up position and knocked down a smooth one-legged jumper, which was the start of 10 quick points for the senior to open the second half that helped mount a 16-point lead.

The Patriots made it interesting down the stretch, bringing it to within four points three times during the final two minutes, but Milford Mill answered Thomas Johnson’s every punch for a 68-59 victory in the MPSSAA Class 3A semifinals. The Millers will now play No. 1 Poly on Saturday at 3 p.m. for the 3A state title.

“Thomas Johnson was a tough team out of Frederick. We had to get our guys together. We haven’t played since last Saturday. I knew once we got it together and rebound a little bit more … make a few more foul shots, we’ll take control of the game,” Smith said. “We got senior leadership from Ahmed Milton, Eric Turner, and Ugo Obasi. That always helps. … We’re excited to be back [in the state title game].”

Turner ended up with 20 points on 7-for-10 shooting for Millers, while pulling down seven rebounds. Obasi, who battled foul trouble for most of the contest, also netted 20, but on 8-for-14 shooting. He also grabbed seven rebounds and hit three of Milford Mill’s seven 3-pointers. Milton didn’t quite stuff the stat sheet (five points, four assists, three rebounds and two steals), but the senior dictated the pace of the game and played a large hand in holding Thomas Johnson to zero fast-break points.

“I watched film over and over and over before this game,” Smith said. “We just pushed him to his left. … I know he’s a catch-and-shoot guy. He played AAU with a couple of these guys. I knew what he wanted to do.”

Foreman’s final bucket came with roughly four minutes left in the third quarter, a deep 3 to cut Milford Mill’s lead to 40-34. Shortly after, Turner chugged down the floor for a fastbreak layup and then hit a critical 3-pointer in the corner near his team’s bench to put Milford Mill up, 48-34.

Surprisingly enough, Milford Mill started the game slow, missing its first five shot attempts and turning the ball over twice before its first bucket at the 4:52 mark — an Obasi 3-pointer on the left wing. The Millers ended the first quarter on a 15-5 run to take a 15-11 into the second quarter. Behind a pull-up 3 by Foreman and four points from JR Powe (12 points, nine rebounds), TJ reeled off a 15-4 run to go ahead, 26-22, with roughly 3:30 left in the second quarter. Milford Mill took a 30-27 lead into the break, before it started the put-away stretch to open the second half.

The Millers will now vie for the program’s seventh state title and their first since 2013.

Richard Rivas added 15 points for the Patriots, which, like Milford Mill, missed 11 free throws at the line.

“Free throws, that was the killer,” Thomas Johnson coach John Manley said. “If we hit our free throws, it’s a whole different ball-game.”